WILDWOOD — An unlikely offensive hero rescued the Wildwood High School boys soccer team from a 32-year, 28-match winless streak against one of its local rivals.

Senior defender Andrew Zielinski, pushed forward due to a corner kick chance, headed home his first high school goal after a missed clearance by the defense with 12 minutes to play to deliver the Warriors a 2-1 victory over Lower Cape May.

The win was Wildwood’s first in the history of its program against the Caper Tigers. The Warriors had been 0-26-2 against Lower dating back to 1986.

“It was crazy,” Zielinski said. “To get my first goal ever like that … I heard coach (Steve) DeHorsey yell to me to put it in the back of the net every time I ran up for corner. To finally beat Lower during my senior year and be responsible by putting the ball in the back of the net, it’s an amazing feeling.” 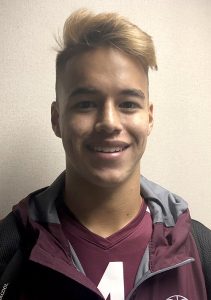 The corner kick, taken by Mateo Perez, seemed to be covered by the Lower Cape May defense, but the clearing attempt was popped straight into the air just in front of the goal line at the right post. Zielinski bravely stuck his head into the mix and nodded the ball across the line before the Tiger defenders could react.

“I saw the ball go up in the air,” Zielinski said. “We always yell at each other when we don’t chase balls down, so I knew I had to do it. When I saw it in the back of the net it was the best feeling ever.”

Tyler Tomlin scored the first goal for Wildwood, finishing a glorious run down the right flank by striking into the left corner of goal inside the far post. He nearly had another  late in the first half but his blistering strike from 20 yards was somehow parried off the post by the hand of diving Lower Cape May goalkeeper Mark Ryan.

Lower (2-12) equalized on a penalty kick by T.J. Shoffler, who calmly sent Wildwood goalkeeper Dennis Olgun the wrong way and chipped into the left corner. The kick was awarded after a Wildwood player handled the ball in the penalty area.

After Zielinski’s goal, Wildwood had a chance to seal the game in the final two minutes but missed a penalty kick. The miss didn’t matter, though, as Lower couldn’t create a good crack at goal at the finish.

Wildwood (9-3) is in the midst of its best-ever season. The Warriors need just two more victories to set a program record for wins in a season.

“Coach told us this is the team he wanted to beat Lower with,” Zielinski said. “Our coaches said this was our time. It was our turn to finally beat Lower.”