CAPE MAY COURT HOUSE — The Middle Township High School football team played its best half of the season in the final game of the season.

Trailing by a point at the half, the Panthers exploded for 31 unanswered points in the second half to beat Lower Cape May, 44-14, to win the annual Anchor Bowl Thanksgiving Day rivalry game.

Karl Giulian ran 21 times for 177 yards and three touchdowns and Caron Haas scored two defensive touchdowns to lead the Panthers, who finished the season at 5-5.

“We had too many turnovers and too many penalties (in the first half) but unlike some of our other games when we’ve made those mistakes we responded,” Middle coach Frank Riggitano said. “Part of that is who were playing, because obviously it’s a big game for the kids. But we played the way we’re capable of playing. In the third quarter, we were great. We stuffed them on defense and we moved the ball on offense. I’m so happy for the kids.”

Giulian’s six-yard touchdown run capped a seven-play, 60-yard drive to open the second half and give Middle the lead for good. 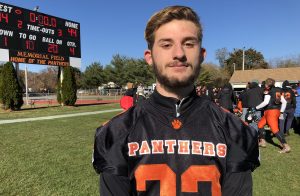 Charlie McNeal then picked off a pass and returned it 28 yards on Lower’s second offensive play of the half, and John Carlson booted a 22-yard field goal to increase Middle’s lead to 22-14.

David Hayes broke two tackles en route to a 44-yard touchdown run with 1:53 to go in the quarter, and Haas scored his second touchdown after scooping up a fumble following his own strip sack and running in from 25 yards out less than a minute later.

Giulian finished the game’s scoring with an eight-yard touchdown run early in the fourth quarter.

Middle scored its 31 second-half points in less than 15 minutes of game time.

“We talked about it in the locker room and we knew we had to win the second half,” Giulian said. “We came out firing and got a touchdown right away and kept it rolling.”

After a scoreless first quarter, Giulian ran 73 yards on the first play of the second quarter to open the scoring. Haas then returned a fumble 16 yards for a second Middle touchdown only 12 seconds later.

But Lower responded later in the period. One play after the Tigers recovered a fumble, Connor Eckel hit Jonas Lumbruno for a 40-yard touchdown pass and then tossed again to Lumbruno for a two-point conversion. Lumbruno then gave Lower (6-4) a 14-13 lead with a 10-yard scoring run with 1:43 to go before halftime.

Lumbruno also stopped a Middle threat in the waning seconds of the half by intercepting a pass in the end zone.

But Middle dominated the second half, increasing its advantage in the series, which dates back to 1922, to 58-36-5.