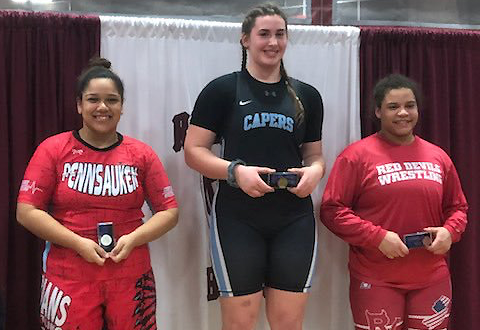 Joelle Klein needed a little coaxing to come out for the wrestling team at Lower Cape May Regional High School back in November.

Billy Damiana, the head wrestling coach and an assistant football coach at the school, noted that Klein had been a female powerlifting champion at a competition at St. Joseph High School last March and that she was a two-way starter along the offensive and defensive lines for the Caper Tiger junior varsity football team this past fall.

“With her being a championship powerlifter and having just gone through football, I just didn’t think many girls would be able to beat her athletically,” Damiana said. “I thought if we could just teach her the basics and a few moves, that she’d do great.”

Klein made history Sunday by winning three matches to emerge as the 225-pound champion in the first-ever NJSIAA South Region Championship Tournament for girls wrestling. The event was held at Kingsway High School.

“It was so exciting,” Klein said.

Klein, the No. 1 seed, needed just 48 seconds to pin Pennsauken’s Sarah Mireles in the championship bout. She also won by fall in 4:36 over Kaylin Davis of Wachtung Hills in the semifinal round.

Klein, who also won an all-female tournament earlier this season, improved to 7-0 against female wrestlers at the tournament. She also went 8-8 against boys in junior varsity matches during the season.

Klein was asked about being a winner at the first-ever girls region tournament.

“It’s exciting to think about,” she said. “Originally, walking off the mat I don’t think I fully realized what had happened. But to see so many people there watching us, it was really cool.”

While the competition was intense, Klein said there was a great camaraderie among the athletes at the tournament.

“When we were having our picture taken with our medals, all the girls were just so together,” she said. “It was really neat.”

Klein moves on to the state championships in Atlantic City.

“I don’t know how that’s going to be. I can’t even picture it right now,” she said with a laugh. “I think I’m going to be surprised.”

Despite having reservations about joining the wrestling team at first, Klein performed well right from the start.

“I could tell she was a little nervous about it,” Damiana said. “I told her to just give it three days. If she didn’t like it after three days, none of us would’ve thought any less of her if she didn’t want to do it. But then she got out there the first day and scored three times during practice and I think she was hooked.

“She’s worked hard ever since. She’s out there every day practicing against the guys and that’s helped her a lot. Then she wrestled guys most of the season. She only faced a female for the first time a few weeks ago.”

“I think her winning regions is the coolest thing in the world. Being from where we are, I think our kids have a little chip on their shoulder because it’s like we’re always considered an underdog being from the bottom part of the state. Now she’s gone out and made history for herself and the school. I think it’s very humbling, but it’s also really cool for all of us involved and especially Joelle.”

Klein said she appreciates the support she has been given. She said she has felt accepted by her teammates on both the football and wrestling teams.

“I’ve always felt as just one of the teammates,” she said. “Most of the guys on the wrestling team I knew from football anyway. They didn’t care. They were like, ‘This is cool. Now we have a girl on the team.’

“Everyone at the school has been extremely supportive. I’ll walk down the hall and a random teacher will say, ‘Congratulations on what you’re doing,’ or, ‘Hey, you’re really doing great out there.’ The school has really been good to me.”