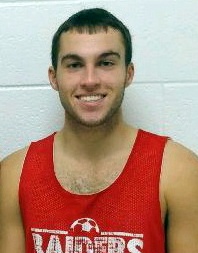 And Paul Baruffi’s OCHS girls officially qualified for the Cape-Atlantic League Tournament with a 52-34 win over the Falcons in the Dixie Howell Memorial Gymnasium.

Varallo (above) made four of seven three-point attempts, the fourth with 5:01 left in the fourth quarter, to bring his career total to 108. That ties the record set by Rick Lipford in 1994. With his next three, Varallo will have the record all to himself.

Oakcrest had the lead in the first quarter but the Raiders made an 11-point run that carried into the second period and took the lead for good. Donovan Graham had 18 points and Varallo finished with 16. Joe Sacco had six points, six rebounds and six assists. It was the 43rd time a John Bruno coached team has defeated Oakcrest, his most wins against any team.

The Ocean City girls (15-4) had to come from behind, trailing 14-5 after the first quarter. They took an 18-16 lead at halftime after some intense defense and took off from there. Danielle Donoghue led Ocean City with 16 points and Abbey Fenton contributed 12. The pair combined for five three-pointers in the game.

The win assured Ocean City of second place in the National Conference and the top two teams in each conference automatically qualify – along with a pair of wild card teams selected by committee. The Raiders join defending champion Mainland, Atlantic City and Atlantic Tech as the first four teams to officially qualify.

The OCHS girls will play Manchester Township tomorrow at 3 p.m. in the War vs. Shore Showcase at Mainland Regional High School. Manchester is ranked No. 5 in the state by NJ.com and No. 2 in South Jersey in the Online 25. Check out the rankings here – http://www.primeevents.net/FussnerAward.html.

Both Ocean City teams will play Lower Cape May on Monday – the girls in the Dixie Howell Gym and the boys in Erma. John Bruno’s boys (16-3) can clinch a spot in the CAL Tournament by beating the Tigers on Monday.

Both OCHS basketball teams are seeded second in the NJSIAA South Jersey Group 3 Tournament. The girls will host Timber Creek and the boys will face Cherry Hill West in the opening Group 3 doubleheader on February 26 in the Dixie Howell Gym starting at 5 p.m.

And here is the information most Ocean City fans would like to know – if the OCHS boys play Mainland in Group 3 it would be March 1 in the South Jersey semifinals in the Dixie Howell Gym. And, if the Raiders and Mustangs girls play, it would be in the South Jersey final for the third straight year and would be played in Linwood on March 4.

You can see the complete brackets for the NJSIAA Basketball Tournament here – http://www.primeevents.net/Brackets2019.html.