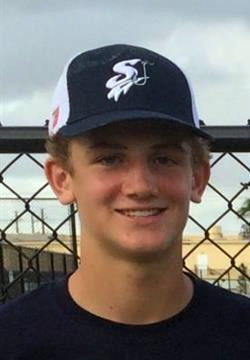 Ocean City High School freshman Tom Finnegan announced today that he has committed to play baseball at the University of Kentucky.

“Pretty much everything there is to like about a school I liked about Kentucky,” Finnegan said. “As soon as I talked to the pitching coach at a showcase a few months ago, I instantly fell in love with how they coached. As our relationship developed he invited me to their camp this past weekend. As soon as I stepped on campus I got the feeling that this was where I would end up.

“I met some of the players and the chemistry on the team seemed great. I loved the way the coaches approach games and practice. It was just the way I love to play baseball.”

Finnegan, who had great success in youth baseball before high school and will join an already impressive OCHS pitching staff this spring, had visited Maryland and had conversations with coaches at Elon University

“A lot of smaller schools don’t seem to want to commit this early,” Finnegan said, “and the quality of SEC baseball is another reason I chose the school. They pretty much play all year ‘round.”

Finnegan did like the process of visiting schools, though.

“I’ve loved looking at colleges ever since I was young,” Finnegan said. “I really liked Duke and some others. But when I got to Kentucky it was just a weird feeling. The coaches were great and they also developed a close relationship with my parents. I just felt it was hard to imagine a better choice.”

The Kentucky recruiters also liked the fact that the 6-foot-5 Finnegan was playing basketball at Ocean City. He scored a career-high 12 points in Monday’s varsity game at Cumberland.

“They talk a lot with me about basketball,” he said. “They love the idea of playing another sport in high school. I think coaches love to see how athletic a kid is because it makes it easier to coach them.”

Though Finnegan has no high school stats yet, it won’t take long.

“I told Tommy that we are going to get started quickly,” said OCHS baseball coach Andrew Bristol. “We’ve got four games in the first five days of baseball season, so he will be in the action right away.”

“I love that,” Finnegan said, after becoming the rare athlete to commit to his college career before officially getting his high school career started.