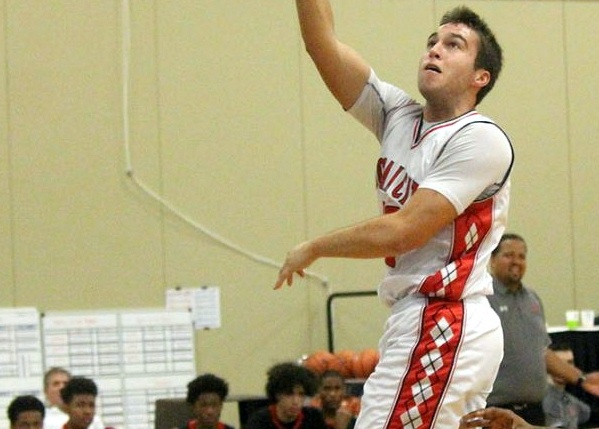 The win clinched second place for the Raiders (17-3) in the Cape-Atlantic League’s National Conference and assured them of a spot in the CAL Tournament that begins on Friday. Ocean City’s likely first round game will be at St. Augustine Prep, though official seedings will be announced on Wednesday.

OCHS ran out to an 11-2 lead in the first six minutes and led, 36-16, at the half. Varallo made three three-pointers in the game, increasing his career total to 111. He had entered the game with 108, tied with Rick Lipford for the school record.

Varallo also becomes the first OCHS player to be a starter on three consecutive teams that qualified for the CAL Tournament.

An exclusive video interview is below.

Joining Varallo in double figures were Joe Sacco with 14, Mike Rhodes with 11 and Donovan Graham with 10.

Paul Baruffi’s team played without senior Molly Hoffman and junior Abbey Fenton, who were both injured over the weekend. Hoffman is out indefinitely but Fenton could return for the CAL Tournament on Friday. Marin Panico and Marlee Brestle gave Baruffi some good minutes tonight in their place.

Both OCHS basketball teams will play Cedar Creek on Wednesday – the boys at home in the Dixie Howell Gym and the girls in Egg Harbor City.

The win moved Shane McGrath’s team into the South Jersey championship meet against the winner of tomorrow’s meet between Mainland and Moorestown.

Hays broke the school record in the 200 individual medley in 2 minutes, 10.03 seconds. He also finished first in the 100-meter breaststroke and was part of two winning relay teams. Hays joined Ethan McCarron, Peter Horowitz and Ben Wiley to win the 200 medley relay in school record time (1:52.46). And he teamed with Horowitz, Brian Walsh and Tanner Driscoll to win the 200 freestyle.

The girls swim meet at Mainland, also a South Jersey semi-final, was postponed until tomorrow.

Check out all the OCHS daily results and schedules in the Raider Sports Diary – http://www.oceancitysports.com/OCDiary.html.