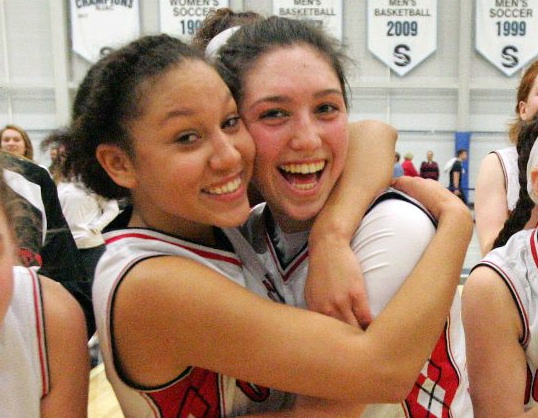 The Cape-Atlantic League’s basketball championships have been held at Stockton University 18 times, starting back when it was Richard Stockton College.

Things have changed through the years but, over the last four years, two things were constant – Danielle Donoghue and Tori Rolls.

These two Ocean City High School seniors have made the CAL championship game part of their regular schedule, playing in the game all four years. They played on two champions and two runners-up.

Today, though, in their final appearance, the two versatile athletes turned the game around and led to the Raiders’ 39-33 victory over Middle Township. It was the sixth CAL championship by Paul Baruffi’s girls, the most by any program.

Middle (21-5) came into the game with 17 straight wins, had taken a seven-point lead in the third quarter and was still leading, 33-30, with 1:02 left in the game when Rolls fed Savanna Holt for a layup. Then, 10 seconds later, Rolls stole the ball and raced down court for a layup to give OCHS (20-6) the lead. Another 20 seconds later, Donoghue stepped to the foul line and buried two free throws for a three-point Ocean City lead.

With 24 seconds remaining and still a one-possession lead, the Raiders had the ball out of bounds at the opposite end of the floor when – Boom! – Rolls streaked for the basket and Donoghue threw the ball more than halfway down the court, hitting her in stride for a layup by Rolls that sealed the win. It was a pass that would have been worthy of her brother, Andrew, who holds the school record for career passing yards at OCHS.

Donoghue finished with a team-high 12 points, including a pair of three-pointers, along with two steals, two blocks and three assists.

Those four points in the final minute were Rolls’ only points in the game but she also had three steals and three assists. Plus, when she was switched onto Middle’s 1,000-point scorer, Kira Sides, defensively in the second half she limited her to three shots in 16 minutes. Sides, nevertheless, finished with 24 points, the sixth highest total in 28 years of girls championship games.

Danielle Donoghue and Tori Rolls, both interviewed below, are going to college to play other sports (Danielle to Mount St. Mary’s for lacrosse, Tori to Montclair State for soccer) but they made their mark on the CAL championship. And elsewhere. Ocean City has a 97-22 record over four years with these two girls in the lineup. Their next loss will probably be the last organized basketball game they play.

But one thing is for sure – the CAL championship game won’t be the same without them.

Brian Cunniff has a complete story about the game here – https://coastsportstoday.com/2019/02/ocean-city-2/.

For complete schedules and results of all OCHS teams, visit the Raider Sports Diary here – http://www.oceancitysports.com/OCDiary.html.