VIDEO: Crusaders’ season for the ages ends with OT loss to national power

Middle looks ahead after another successful season 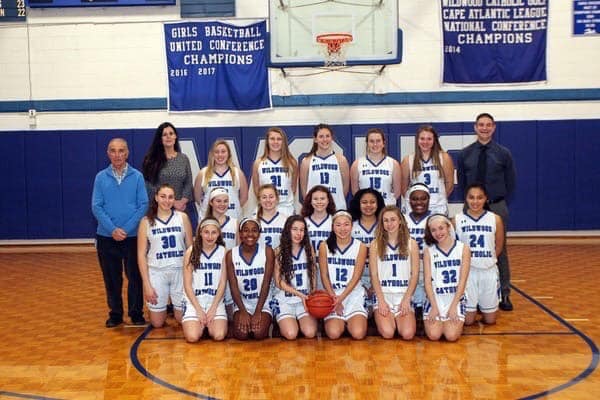 A team with no seniors in the starting lineup made a nice run in the state tournament before its season ended last Monday.

The Wildwood Catholic High School girls basketball team rolled past Our Lady of Mercy Academy and slipped by powerful Gill St. Bernard before running into a juggernaut and being eliminated from the South Jersey Non-Public B playoffs after an 84-43 defeat to Trenton Catholic.

“Non-Public B South is by far the deepest section,” Wildwood Catholic coach Steve DiPatri said. “To beat a power like Gill on Friday and then have to come back and play Trenton Catholic at Trenton Catholic is a daunting task for any team. … You get the idea of the speed and talent it takes to win at that level.”

The loss ended a brilliant season for the Crusaders, who set a program record for victories by finishing at 23-6. It was the program’s fifth 20-win season in six years.

The future looks bright, too. Wildwood Catholic ended the season with no seniors in its starting lineup, after Erin Connelly suffered a season-ending injury back in December.

Another milestone was accomplished when forward Marianna Papazoglou became the first sophomore in school history to reach 1,000 career points as a sophomore. That was achieved in the victory over Gill St. Bernard. She’ll take 1.039 career points into next season. She averaged 19.3 points, 10.7 rebounds and 5.1 assists in 2018-19 and went on to earn first team all-non-public honors by the Al Carino Basketball Club of South Jersey.

In addition to its success in the state tournament, Wildwood Catholic was also one of the better teams in the Cape-Atlantic League. The Crusaders reached the semifinal round of the CAL PLayoff Tournament.

All these accomplishments — and more — could certainly be attainable next season.

“At end of every season we look at our five-year projections of where we are and who might be on the roster and this is the best I’ve felt at the end of a season since I’ve been at Catholic,” DiPatri said. “We have some talented players. Now we’ll have some talented players returning with experience that have played at higher levels. It’s my hope that a year of maturity not just as basketball players but as people will make us even more focused and more ready to move forward and take the next step.”