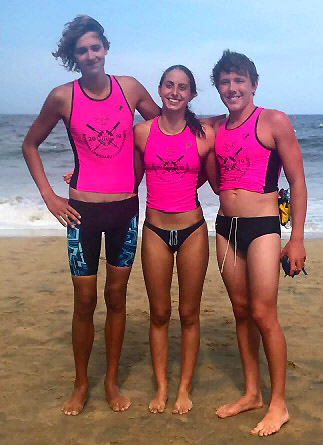 Bella Taylor of the Wildwood Beach Patrol is a junior national champion twice over.

Taylor beat out seven other lifeguards, some hailing from as far away as California and Canada, to win the ironperson event.

Taylor also topped a 14-lifeguard field to win the rescue board race, again against a field of competitors from across the country.

Taylor was also second in both the ironguard and surf swim race and placed fifth in the run-swim-run event.

Diamond Beach Beach Patrol lifeguard Gavin Loughlin also performed well at the event. He placed second to Longport’s Joey Tepper in both the run-swim-run and the ironguard and also placed second in the rescue board race, one spot ahead of Tepper.

Taylor, Loughlin and Tepper are all under consideration for selection to the U-19 USLA International Team.