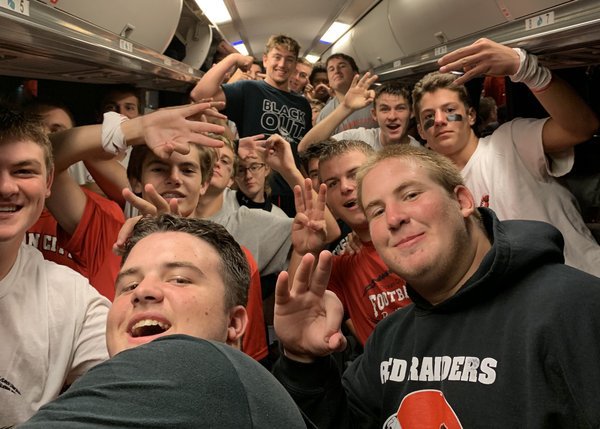 126-0: Ocean City High School has had a football team for 102 years and never before has an OCHS team scored the first 126 points of the season. These Raiders have shut out three straight teams for the first time since 1985 and Ocean City last had shutouts in its first three games for the first time since 1976. Kevin Smith’s team joins Donovan Catholic, Waldwick and Montville as the only four teams in the state who have not allowed a point this year. And Ocean City’s 126 points is more than any of the other three.

Ranked. Ocean City has moved into the South Jersey rankings for the first time since 2001. The Raiders have joined Cape-Atlantic League schools Cedar Creek, Holy Spirit, Mainland, St. Augustine and St. Joseph in the Online 25. This ranking includes every team that could play in NJSIAA South Jersey playoffs, including some schools generally considered Central Jersey schools. See where every team stands here.

Rogers: Senior Jaden Tocci-Rogers scored the first two touchdowns against Bridgeton, the first two of his career. On the first, he leaped above the defense deep in the end zone for the score. On the second, he made two strong crossover steps to leave two defenders with empty arms. Tocci-Rogers has demonstrated his athletic ability elsewhere. He was second in the county, fourth in the CAL and fourth in South Jersey in the high jump. His father, Ray Rogers, was one of the school’s great athletes of the 1990s. He is second all-time with 1,378 career receiving yards and holds the school record for most points by a freshman (23) in a varsity basketball game.

Jake: Wide receiver Jake Schneider caught three more passes for 38 yards and a touchdown. He came within a step of returning the game’s opening kickoff for a TD, having to settle for a 55 yard return. Schneider has 200 receiving yards in three games and lifted his career yardage to 748, moving up to 10th in OCHS history, moving past Frank Sannino.

Tying Slaveski: Friday’s win was the 34th by Kevin Smith as head coach at OCHS. That ties him for fourth all-time with Mike Slaveski. Ahead of them are Gary Degenhardt (101), Fenton Carey (61) and Ed Woolley (47).

Defense: In addition to shutting out three straight opponents, Ocean City has limited those three opponents to a combined 113 yards of offense and only two yards passing. Those three opponents are 6-for-34 passing while OCHS is 26-for-34. The Raiders have 8 takeaways (6 interceptions, 2 fumbles) and have 9 sacks for 54 yards in losses. They have outscored opponents, 68-0, in the first quarter.

More defense: Only one of the team’s top seven tackle leaders is a senior. He is Tom Oves, who is second to junior Jake Inserra in tackles. Oves and junior Will Drain lead the team with 4.5 tackles for losses. Junior Brad Jamison leads with 2.5 sacks. All together, Ocean City has made 32.5 tackles for losses totaling 124 yards.

Scoring Leaders: Junior Joe Repetti is second among CAL quarterbacks with eight TD passes; Schneider is second in TD receptions and tied for sixth in points scored; sophomore Brendan McGonigle is second in kicking points; and OCHS leads in defensive TDs, leads in fewest points against and is second (to Holy Spirit) in points scored per game. See all the CAL scoring leaders here.

Quick strike: The Raiders have scored a touchdown in the first 100 seconds of each game this year.

Kevin Smith says: “I thought , once again, we got out of the gate and executed well. We took Bridgeton’s run game away and that let us get some three-and-outs. On offense, we were able to mix the run and the pass pretty well. The second string kids did a nice job in the second half, which was great to see. It was a complete team victory.”

LINKS: The complete Ocean City-Bridgeton stats are here. Complete three-game OCHS stat totals are here. The video of the game is here. Standings in selected WJFL divisions are here. Links to online coverage of this weekend’s games are here.