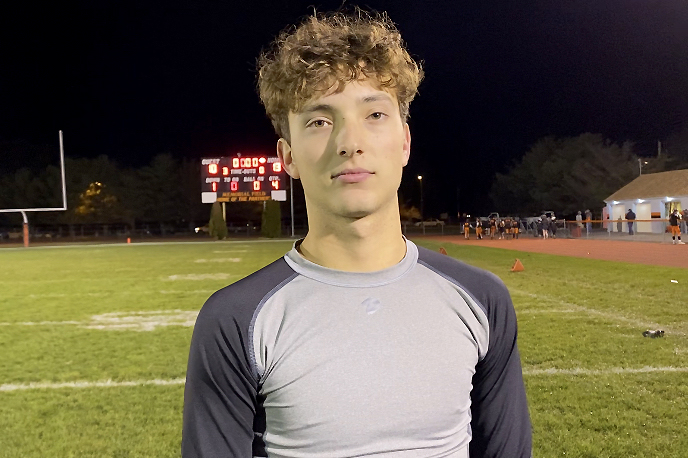 After all, the sophomore made two pressure field goal attempts, one on the final play of regulation and the other to win the contest in overtime.

But there were quite a few plays made that led to Licata becoming the hero.

None were bigger than the ones made by Matthew Barcas.

The junior wide receiver made two sensational catches during the 17-play drive that led to Licata’s game-tying field goal.

The first was a sliding reception on a third-and-10 play that gave Middle a first down at the Gateway 18-yard line. On the play, quarterback Brett Nabb rolled to his right and spotted Barcas streaking toward the sideline. Barcas hauled in the pass while sliding to the turf with a Gateway defender closing quickly.

The second, and most crucial, reception came on a fourth-and-14 play from the 22-yard line. Rather than try a 37-yard field goal, Middle decided to go for the first down.

“Jerome has the leg to kick it from there, because he’s done it in practice, but in that situation we just felt like that would have been way too much pressure from that distance. It was just too far,” Middle coach Frank Riggitano explained.

The resulting play was nothing less than sensational.

The Gateway rush forced Nabb to roll to his left. He initially looked toward the end zone, then decided to throw across his body toward the opposite sideline. It seemed like a toss made out of desperation — and in a lot of ways it was — but Barcas alertly came back to the ball and out jumped a Gateway defender to make the catch at the 11-yard line.

His job wasn’t finished. Barcas needed to spin away from the defender to get the three additional yards necessary for the first down. That extra effort to the 8-yard line gave him the needed yardage to keep his team’s hopes alive.

Without timeouts, Middle spiked the ball on the next play to set up Licata’s game-tying field goal from 25 yards.

“Barcas really made two unbelievable catches,” Riggitano said. “Absolutely crucial to what we needed to get done. This should be another boost for him going forward. He’s another one of our young guys that has a chance to really help us.”

Video clips of both of Barcas’s catches on Middle’s final drive in regulation is available on this page.