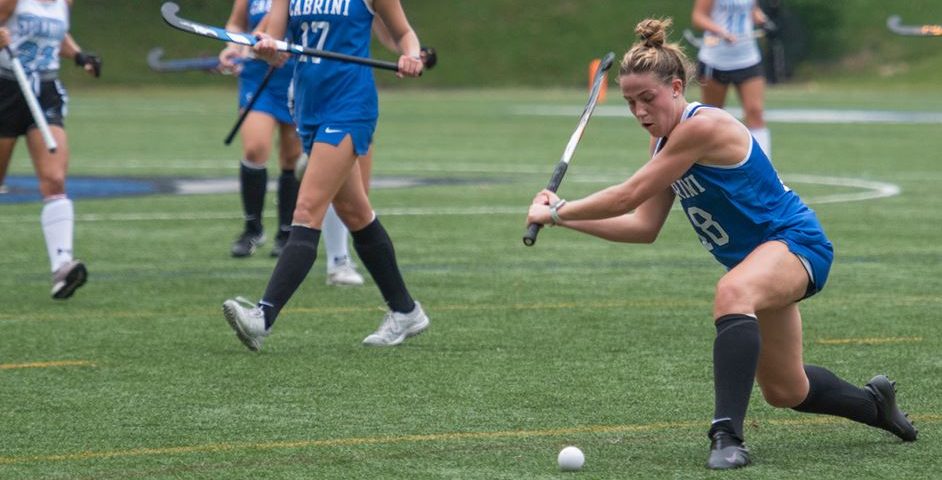 Middle Township graduate Caroline Gallagher played an integral role as the Cavalier field hockey team won the AEC title with a dramatic 2-1 double-overtime victory over St. Mary’s (Md.). Gallagher, a sophomore, assisted on the winning goal scored by teammate Adrianna Jones with only 47 seconds remaining in the second overtime.

In addition to her winning helper, Gallagher also posted a game-best eight shots in the contest.

Gallagher has started all 19 games for Cabrini (11-8) and has posted 13 goals and eight assists, good for tops on the team in both categories. She was named the AEC Offensive Player of the Week on Oct. 19.

Sophomore Makayla Hueber, a Lower Cape May graduate, is also part of the Cabrini field hockey team as a backup goalkeeper.

In men’s soccer, Middle Township graduate Christian Rafter was among the goal scorers in Cabrini’s 4-0 win over Neumann in the AEC title game. Rafter’s goal, which gave Cabrini a 3-0 lead early in the 63rd minute, was his third of the season. Rafter posted four shots, three of which went on goal, in the title game.

In addition to his three goals, Rafter, a senior, also recorded five assists this season.

Another Middle Township graduate, Eddie Proud, started and saw 81 minutes of action for Neumann in the title game loss. Proud, a junior, posted two goals and two assists in 13 games for the Knights this season.

In women’s soccer, Middle Township graduate Anna Bond played 49 minutes off the bench for Cabrini in a victory in penalty kicks following a scoreless draw over top-seeded Marywood in the AEC title game. Bond recorded a shot on goal in the contest.

In addition to conference tournament championships in men’s soccer, women’s soccer and field hockey, Cabrini also won the AEC title in women’s volleyball on Saturday with a 3-1 win over Marymount.