Wayne MacMurray (right), in his 47th summer as a lifeguard in Cape May County, competes with Bill Kindle in last week's Around The Island Row. They finished 10th out of 23 crews. Both men are in their early 60s. 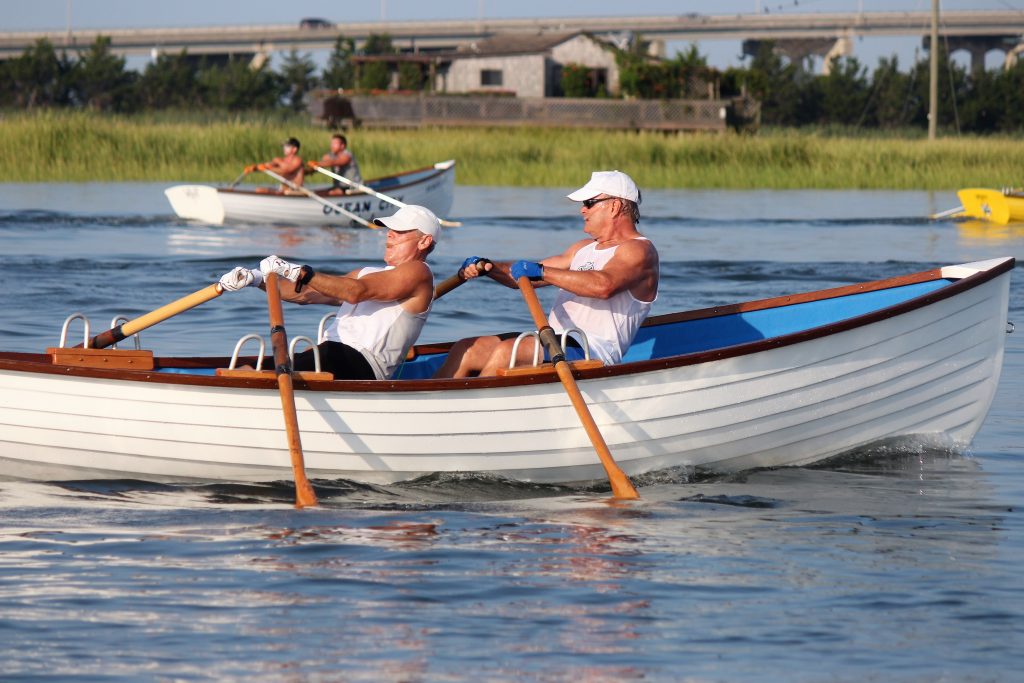 Wayne MacMurray (right), in his 47th summer as a lifeguard in Cape May County, competes with Bill Kindle in last week’s Around The Island Row. They finished 10th out of 23 crews. Both men are in their early 60s.

As a teenager in 1970, Wayne MacMurray joined the beach patrol in his hometown of Sea Isle City for the first time.

“In the beginning, when I was a teenager on the beach, you’re tan, you have a few muscles on your body and you’re kind of an authority figure on the beach, so it was a different feeling back then,” MacMurray recalled with a laugh.

Now, as the summer of 2017 winds down, MacMurray is finishing his 47th consecutive summer as a lifeguard. He’s been with the Upper Township Beach Patrol for the past 23 years as a part-time guard.

Not only does he lend his valuable experience helping guard the beaches of Strathmere, MacMurray is still, at age 62, a respected competitor in lifeguard rowing races. Last week, he and partner Bill Kindle, who recently turned 63, finished a solid 10th out of 23 crews in the Bud Tarbotton Memorial Around The Island Row hosted by the North Wildwood Beach Patrol.

Later in the week, MacMurray rowed with his wife, Ann, in the Hammer Row in Atlantic County.

MacMurray is a 1973 graduate of Ocean City High School. He joined the beach patrol in Sea Isle City following his freshman year of high school and immediately began to row.

“I started off rowing right off the bat with the beach patrol,” MacMurray said. “It takes about three years for a novice rower to really understand the (Van Duyne) boats, the waves, the wind and the currents. Then in 1976 I got my first first-place (finish) in an out-of-town race in the Tri-Resorts (Lifeguard Championships).”

Earlier this summer, MacMurray competed in the Tri-Resorts race with one of his stepsons.

MacMurray, now a resident of Upper, has worked as a technician in the Upper Township School District for the last eight years. That came after a long career as a service technician Wang Technology, a global technology company.

MacMurray served in the United States Air Force for four years, working in technology after earning an associate degree in electronics from DeVry University in Phoenix.

“Even when I was in the Air Force I’d take my 30-day leave in the summer so I could come home and work on the beach,” MacMurray said.

MacMurray worked as a fulltime lifeguard for his first seven summers. Since then, he’s worked weekends and holidays and also helps extensively with late-summer coverage when the beach patrol loses many of its younger lifeguards to school obligations.

After a 13-year career in Sea Isle, MacMurray worked in Wildwood into the mid 1990s before joining the patrol in Upper Township, where he’s been an extremely valuable asset, according to Upper Township Beach Patrol chief Bill Handley.

“He’s been very instrumental to our patrol and the growth of our patrol since the day he joined us,” Handley said. “He’s brought a lot of knowledge of lifeguarding and rowing. Wayne has taught me a lot of what I know about lifeguarding.”

MacMurray serves as a mentor to the younger lifeguards in Upper.

“Whenever a lifeguard is hired he eventually gets rotated through Wayne’s stand at least once their first summer,” Handley said. “Spending an eight-hour day on the stand with Wayne is better than eight hours of rookie school.

“Wayne’s had a lot to do with the recent success we’ve had. He’s taught our rowers some competitive tricks. He’s brought a high level of professionalism for the past 22 years. Every rookie that’s gone through here goes through the school of Wayne MacMurray. There is nobody working our beach patrol that hasn’t been influenced by Wayne one way or another.”

MacMurray said he enjoys the role.

“Doing it this long, I’ve gained a lot of knowledge learned over the years as far as ocean currents and riptides and even how you’re able to identify what’s going on in the water and prevent a swimmer from getting in trouble,” MacMurry said. “I enjoy the feeling I get when I can share my experience with a younger guard.” 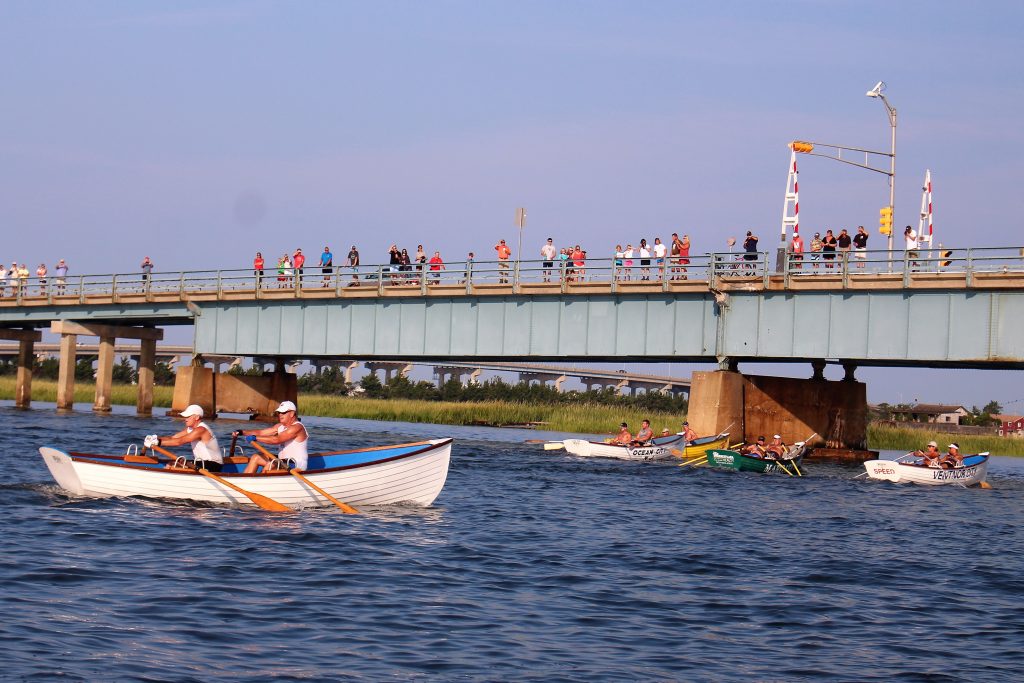 Wayne MacMurray (right) and Bill Kindle approach a bridge during last week’s Around The Island Row.

He also enjoys staying in shape through rowing. He said he and Kindle row seven miles a day, six days per week in the summer months. They also occasionally train together in the non-summer months.

A three-time gold medalist in rowing races at the United States Lifesaving National Championships with three different partners, MacMurray enjoys the challenge of competing in the Around The Island Row and the Upper Township Six-Mile Bay Race each summer.

“I like to stay active and the rowing really keeps me going,” MacMurray said.

It helps, MacMurray said, when family members and friends are all into the sport as well. His stepsons, Joe and Jon O’Neil, have been competitive rowers for Upper Township in recent years.

“There’s a lot of camaraderie with it,” MacMurray said. “A lot of my closest friends are into rowing. It’s what I do. I used to be a three- or four-minute singles rower and now I’m kind of a marathon rower with Bill. It’s neat that we’ve kind of been able to become a premier older rowing crew.”

MacMurray said he appreciates the respect he gets from rowers young enough to be his grandchildren.

“It’s a good feeling when you go up against younger crews, guys that might be rowing in college, and after a race they come over to you and say, ‘Darn nice job out there,’” MacMurry said. “I appreciate the respect they give me.

“I feel very fortunate to still compete, not only with guys my own age but all the lifeguards. It’s good to compete. I remember when I first started out as a teenager, you kind of kept your secrets and your techniques to yourself. But then as I got older I felt like it was my responsibility to teach the competitors, even if they were rowing against me, some of the finer points of getting in the boat fast and getting out of the surf fast and how to handle the conditions. I really enjoy the teaching part of it.”

MacMurray said he doesn’t think about when he might stop lifeguarding.

“I just look at it right now that I’m going to keep going,” MacMurray said. “It’s in the blood and I feel like I’m pretty good at it.

“Now it’s more of teaching and passing on what I know. That’s the most important thing to me now. I love taking a 16-year-old kid and showing him the water and how to watch it for the first time.”