Mainland only managed three shots against Ocean City but scored twice. The Raiders got off 20 shots but only Haleigh Flukey scored.

The boys soccer team used goals by Anthony Inserra, Hunter Paone and Matt Brook (below) to defeat the Crusaders, 3-1, and improve to 3-0. 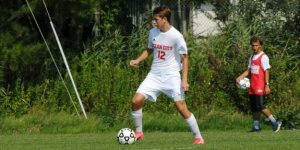 And the girls soccer team (2-0), playing its first game without the injured Tori Rolls, got three goals from freshman Faith Slimmer in a 6-0 win over Lower Cape May.

Tomorrow, both cross country teams will face Millville, Atlantic City and Mainland in a quad meet at the Millville Motorsports Park. The OCHS boys have won 80 straight cross country meets. The Raider girls lost to Mainland last year by one point, their only loss in the last six years.