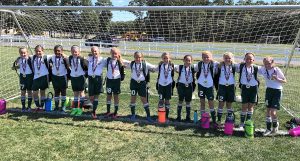 U-9 Lightning vs. Mullica Township RSC Matrix: A strong performance to meet the Matrix’s intensity was brought by the excellent play on the field by Abby Smith, Julianne Goodman, Grace Leiser, Peighton Clemens and Aubrey Schlembach. Strong goaltending was once again in play with the steady nerves of Lily Pettit and Aurora Brown. Goals supporting the intensity were made by Sophia Thomas, Maddy McHale, Aurora Brown and two by Lola McGonigle.

U10 Girls Wildfire vs. East Greenwich Galaxy: Riley Grawl and Hudson Scola were outstanding defensively and Abbey Cappelletti scored two goals for the Wildfire. Adalyn DeAngelis added an insurance goal late, and the goaltending tandem of Cece Mirsky and Molly Quinn allowed only one goal. Constant pressure was applied to the Galaxy defense by strong midfield play of Thompson Sypherd, Carly Godfrey, Rebecca Siteman and Savanna Rolls as the Wildfire continued their strong start to the season.

U-11 Tsunamis 7, Delran Dingos 1: Maeve Quinn netted three goals, Emily Leonard scored twice and Abby Marr and Gianna Vallese each added goals in the win. Maeve Quinn and Brooke Liebrand were dominant in controlling the midfield. Lindsey Seeberger and Ella Jefferson added extra support in the midfield and ran the Dingos all over the field. The backline of Emily Swan, Shaela Gannon, Gwen O’Hara and Lily Keim kept the ball in the offensive side most of the game. Kaia Ray continued to lead the team from the goalie box, continuing to make great saves while becoming a vocal leader of the squad.

U-12 Wave 3, Delran Union 3: Ashley Rhodes scored twice and McKenna Chisholm added a goal for the Wave. Millinda Marigliano and Tyler Connell were strong in the midfield. Despite several last-minute attacks by Zoey Lappin, Madison Pratt and Chisholm, who hit the crossbar in the dying embers, the Wave had to settle for a draw.

U-15 Cyclones 5, TBAA Spirit 2: Aimee Altieri controlled the middle of the field and led the team with three assists. Emily Badger, Makenna Marr, Aneecia Morales and Mia Schultz each scored a goal. Isabelle Smith was outstanding on defense.
BOYS

U-12 Monsoons 3, Moorestown Predators 1: Goals were scored by Nolan O’Kane, Kieran Bender and Ryan Jasiecki. Sam Scarano played the entire game at center back and organized the team. Goalkeeping duties were split between Daniel Beard and Max McCoy.

U-13 Surge 7, Westmont Hawks 1: Joey Goodman was a guest player for the Surge and registered a goal and an assist in his first U13 game. Patrick O’Hara notched a brace and other goals came through Ethan Meron, Santino Lomas and Charlie Dunner. The back line of Ryan Shaw, Anthony Videtto, Dusty Laricks and Ethan Guest were positively impenetrable.