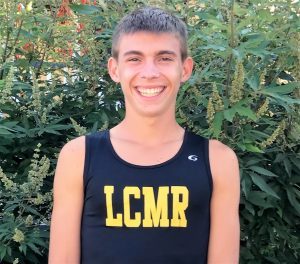 Will Berger wasn’t even the best cross country runner on his team last season.

That designation belonged to Mark Nelson, who won the Big Five and county championship meets last fall and is now running at Division I Monmouth University.

But Berger, a senior at Lower Cape May Regional High School, learned a lot from Nelson over the past couple of seasons.

His senior cross country season is already off to a fabulous start. The highlight so far was winning the stud race over 90-some other runners at the South Jersey Shootout earlier this month at Rowan University in 16 minutes, 1 second.

“That’s only the third (cross country) win I’ve ever had, so it was kind of a whole new experience,” Berger said. “It was nice to see everyone there cheering me on as I came up on the finish line. I was kind of in awe.”

“Will is really going to have a big year,” Demers said prior to the season. “He looks great.”

Berger was a soccer player when he began high school. But he joined the track team in the spring of his freshman year and quickly became keen on distance running.

“I started taking it seriously in the spring of my freshman year and it’s been a constant progression since then,” Berger said. “Every single year when the season rolls around, I feel like I get a lot more serious with it.”

Berger finally began to edge Nelson in some one-mile and two-mile races last spring in track. But Berger certainly credits Nelson’s example for his own success.

“It was really nice to have someone there to kind of stoke the fire to get better,” Berger said. “I had someone there every day wouldn’t let me start slacking off. He was someone I really had to work hard to try to stay with.”

In addition to his distance-running talent, Berger is also one of the top students in the senior class at Lower Cape May. He carries a 4.7 grade point average while taking all AP classes.

His prowess in cross country and track and his strong academic standing have numerous Division I schools taking notice. At this point, Berger said he is most interested in Yale, Penn, Rutgers and Lehigh.

“I always liked running but the fact that it looks like I’m going to have a chance to continue it (in college) is crazy because I never would have expected it,” Berger said. “It just wasn’t on the radar when I first got to high school. It’s kind of shocking to see how far I’ve come over the years.”

Berger said he considers himself a better track athlete at this stage due to his abilities with the shorter-distance races. But he also said he thinks his ceiling may be highest in cross country.

“Right now I see myself as more of a track guy but in college I’ll probably be more of a cross country runner,” he said. “Right now I like to be able to move fast rather than go longer. But I think I’ll up at being a little better at going longer.”

Berger is certainly one of the runners to beat at this Friday’s Big Five meet at Cape May County Park. In addition to Lower Cape May, the race also includes runners from Cape May Tech, Middle Township, Wildwood and Wildwood Catholic.