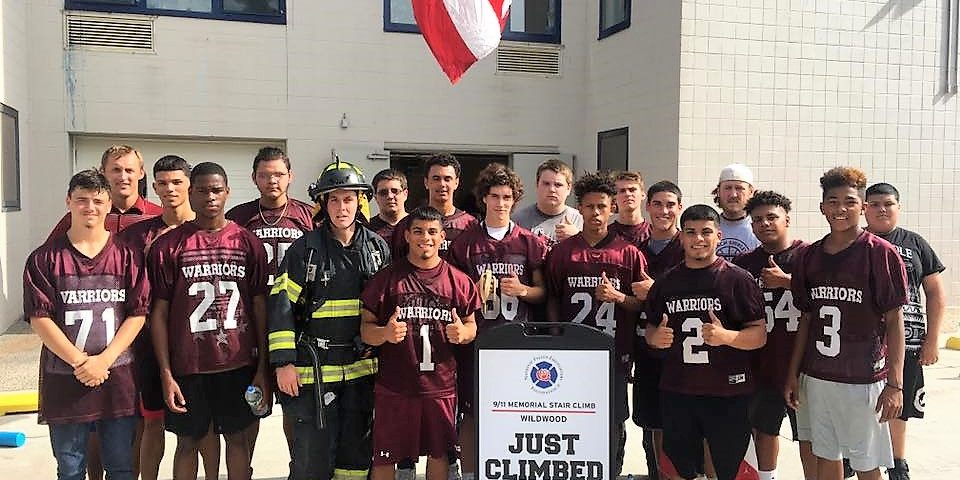 Members of the Wildwood High School football team proudly stand outside Sandman Towers after completing the 110-story Wildwood Stair Climb held as a tribute to firefighters involved in rescue efforts at the World Trade Center in New York on Sept. 11, 2001. 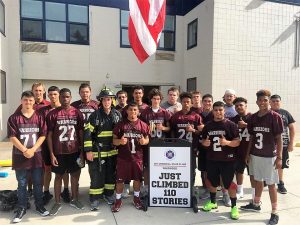 Members of the Wildwood High School football team proudly stand outside Sandman Towers after completing the 110-story Wildwood Stair Climb held as a tribute to firefighters involved in rescue efforts at the World Trade Center in New York on Sept. 11, 2001.

WILDWOOD – Kenzee Delgado is a junior in high school. As a member of the Wildwood High School football team, he’s certainly physically fit for a 16-year-old.

His conditioning was challenged on Monday, however.

“The very first time I went up the steps, I was like, wow, this is really hard and I’m not even wearing all that equipment,” Delgado said.

Delgado, along with every other member of the Wildwood football team, participated in the Wildwood Stair Climb, an event designed to honor the 343 firefighters who died in the World Trade Center while trying to save and treat survivors in the aftermath of the terrorist attacks on Sept. 11, 2001.

The event was held on the 16th anniversary of the tragedy, at the Sandman Towers, an apartment building in Wildwood that is 10 stories high. The climbers went up and down the steps 11 times continuously for a total of 110 stories, the same height as the World Trade Center. 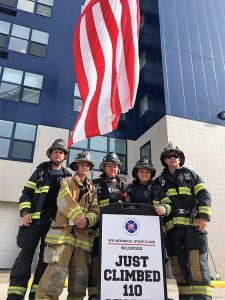 Climbers paid money to participate and also solicited donations for their efforts. According to event organizer Jim Grauel, a captain with the City of Wildwood Fire Department, 162 people completed climbs and more than $18,000 had been raised through Wednesday, with all of the money going to the National Fallen Firefighters Foundation.

The Warrior 50 Booster Club covered the entry fees for the Wildwood football players, who participated in the stair climb rather than hit the field for practice that day.

The experience was surely much more poignant than anything that might have happened at practice.

“I think the kids really got a lot out of it,” said Wildwood football coach Ken Loomis. “I think it was a great lesson in taking each day for what it’s worth and looking forward to the next day, which is something some people sadly can’t.”

Delgado and his Wildwood teammates either weren’t yet born or were infants on that fateful day 16 years ago. They’ve learned a lot about what happened over the years. Monday, they had the chance to experience it to a degree.

“Going up and down the steps, it’s unbelievable to me that there was debris all around them and they had to wear all their equipment. I just couldn’t imagine how hard it was,” senior wide receiver and defensive back Nate Lopez said. “Going up and down I thought it was hard and it wasn’t a disaster going on around us.

“There were people dying up and down there (at the World Trade Center). I thought about how tough that must have been for the firemen.

“I have a ton of respect for them. I think of them in a totally different way. What they do, they put their own safety on the line for everyone else every day. That’s just awesome.”

Delgado said the experience of climbing the stairs was exhilarating and heartbreaking at the same time.

“It was a very positive thing but sad at the same time,” he said. “But no one wanted to quit. Everyone wanted to keep going.

“I felt obligated to do it and to finish it. I wanted to do my part to show respect to the firefighters in the Twin Towers when they fell.”

According to Grauel, stair climbs such as the one at Sandman Towers have been held all over the country. One had been held in past years in Bridgeton. But, he said, there were no other stair climbs held in New Jersey this year, according to his research.

“Everyone walked for someone that day,” Grauel said. “We encouraged everyone to do research on the person they climbed for. I think the climb makes remembering Sept. 11 a little more touching. The ceremonies everyone holds are great but a lot of times it’s a moment of silence and then everyone moves on. I think the experience everyone got out of this made it mean a lot more to them.”

In addition to dozens of civilians, paid and volunteer firefighters from across the county participated, along with many of their spouses or girlfriends. Many of them wore their full equipment, heavy suits, boots and air tanks included.

Grauel was shocked at the interest in the first-time event.

“I didn’t think we’d get this many people here this year,” he said. “To raise that kind of money on a Monday in September is just crazy.”

All who participated gained an incredible level of respect for those who were involved on that terrible day in New York City.

“It was very hard and very hot in there,” Delgado said. “My legs were sore even after the very first time going up. But we had to stay mentally strong and keep going up.

“I see (the firefighters) all as real people that want to help. All they want to do is do good and help. I want to be like that and I want everyone to come together and help people.” 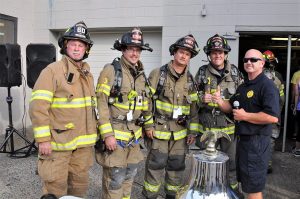