Wildwood will be ready for opener

To borrow a phrase, perhaps an overused one – rumors of the Wildwood High School football team’s demise were greatly exaggerated.

In mid August, word buzzed through the local and South Jersey football communities that the Warriors might not field a team this fall after just a handful of players were showing up for early preseason practices.

But, as usually occurs with Wildwood’s program, players trickled in eventually. Now, Wildwood will have a full team ready to suit up for Friday’s opener at Schalick (7 p.m. start).

It’ll be a tough one, considering Schalick is one of the most talented teams on Wildwood’s schedule.

“We’re basically going up there with the mentality that the scoreboard’s off and we’re going to try to execute and run our stuff the best we can,” said second-year Wildwood coach Ken Loomis. “We’re not worried about Schalick. We didn’t scout them and we haven’t looked at any film on them. We’re focused on us. It’s a tough game, definitely. But we’re more worried about executing our formations and our plays.”

Wildwood lost two outstanding players to graduation in Tray’von Young and Nick Sottnick. But the Warriors, who featured about 23 players on the roster, do have some experienced players back. Many of them are seniors. 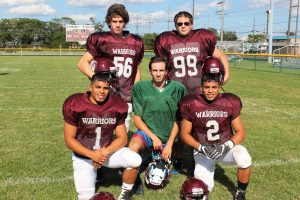 With such a small roster, it’s no surprise that many of the players will start on both sides of the ball.

“Pretty much all our skill guys are going to play both ways,” Loomis said. “We’ll rotate a little on a defensive line and we’ll try to keep our offensive line together. But for the most part, most of the guys won’t be coming off the field.”

It’s no secret Wildwood will be an underdog in most, if not all, of its games. But that’s not stopping the team from trying to be as competitive as possible.

“We want to be competitive and try to win some games,” Loomis said. “We know what we’re up against. But we’re going out there to be as crisp and as clean and to have no penalties. We want to execute as best as possible and go from there.”