Wildwood will be ready for opener 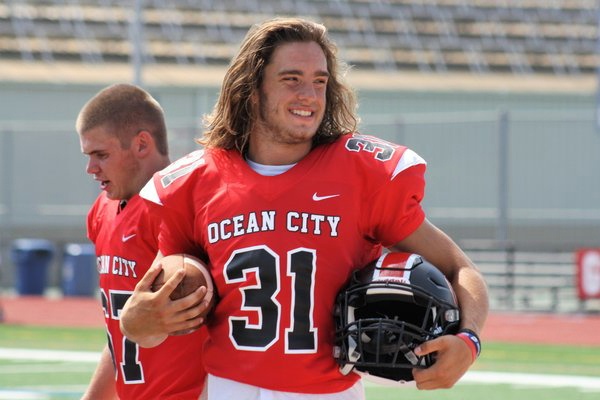 Ocean City knew it had some proven running backs returning to its football team with quickness like Issac Robertson and Liam Bergman. The Raiders were pretty confident in their line play with Art Spackman, Chad DiDonna and Sam Holmes leading the way. The one question was at quarterback, where Harry Pfeifle was taking over after missing an entire season following knee surgery.

Pfeifle scored the Raiders’ first two touchdowns tonight and played the position like he’d been doing it for years in Ocean City’s 26-6 win over Oakcrest at Carey Stadium.

OCHS controlled the line of scrimmage from the start, piling up 19 first downs while limiting the Falcons to six. The Raiders out-gained Oakcrest, 361-89, in total yardage. The game was marred by 17 penalties for 179 yards, many rather questionable. 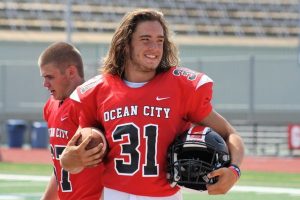 Pfeifle, above, got the first score of the season from two yards out on the first play of the second quarter to complete an 86-yard drive. He sliced off the right side between blocks by Chad DiDonna and Bill Kroeger.

He scored again with a 29-yard burst down the left sideline early in the third quarter with the help of downfield blocks by Kroeger and Bob Shallcross. Keith Larkin kicked both extra points.

After Pfeifle’s first score, the Raiders got two points when Oakcrest’s center snapped the ball over the punters head and out of the end zone. But the Falcons would march 82 yards in less than two minutes to score when Naji Hart made a great catch of a Nico Conti pass for a 25-yard score with 45 seconds left in the first half.

Bergman scored Ocean City’s other TD on an eight-yard run in the third period. All three of the Raiders who carried the ball – Pfeifle (16 carries, 124 yards), Bergman (18/109) and Robertson (12/65)– showed good speed, quick moves and great field vision.

Strangely, Oakcrest gave Ocean City the final two points when another snap went over the punter’s head for another safety in the fourth quarter.

The Raiders can celebrate a little longer because their bye week is next week. They return to action on September 23 in a Saturday afternoon game at Cedar Creek.

EXTRA POINTS: The complete stats and game box score are at http://www.oceancitysports.com/ocfootballgamestats.html … this win ended was Oakcrest’s four-game winning streak over OCHS. The Raiders had last won in 2008. Ocean City leads the overall series, 20-8 … Oakcrest lost starting quarterback Trey Sayers to a broken collarbone late in the pre-season. He is a junior, the son of Frank Sayers, who was the leading scorer and ground gainer on Ocean City’s 1984 South Jersey champions … Brandon Lin was involved in 10 tackles, including four solos. Tom Meehan was involved in eight and Kevin King seven … Dom Daniel made 11 for Oakcrest…the video of the entire game is available at http://www.OceanCitySports.com