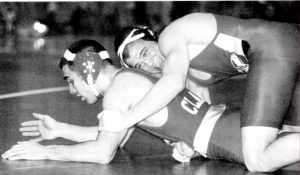 Greg Austin, who won 105 times in his Ocean City High School career and finished second in the state as a senior, will be inducted into the South Jersey Wrestling Hall of Fame next month.

Austin (above at OCHS) is one of five OCHS wrestlers to win three or more district championships, one of four to win a region title and one of three to reach the final state championship match during his career.

Austin was 105-14 in the Ocean City lineup and went on to win 106 matches at Rutgers. He is the third Ocean City wrestler to be selected to the Hall of Fame, joining Patrick Lynch and Joe Galante.

He will be joined in the induction ceremonies next month by a fellow Cape-Atlantic League wrestler – Ryan Bridge of Absegami, a two-time state champion who won 136 times.

Also being added to the Wrestling Hall of Fame will be Ivan Wiggins of Sterling, who won 128 matches; Doug Umbehauer, who won 128 times at Lenape; Dan Calhoun, who won 117 matches at Washington Township; Mike Ahern, who won 101 matches at Paul VI; Kyle Young, who won 92 matches at Cherry Hill West; and John Atkinson of Woodbury, a contributor to South Jersey wrestling.

The induction will take place Saturday, Nov. 11 at Masso’s Crystal Manor in Glassboro. Tickets for the ceremony, which will follow a dinner, are $40 and can be purchased through Mike Schuld at 609-206-2206.