Wildwood Catholic's Jared Wallace gets ahead of an EHT defender to create a chance in the second half.

STONE HARBOR – The celebration for Wildwood Catholic High School boys soccer coach Mike Saioni will have to wait for another day.

The Crusaders, trying to give their coach his 100th career victory, fell short in a comeback bid and lost, 2-1, to Egg Harbor Township Monday.

EHT (3-7) scored twice in the first 15 minutes, getting two tallies from Burak Cimen to stun Wildwood Catholic as the match opened.

Irving Fenochio pulled a goal back for Wildwood Catholic in the 17th minute. 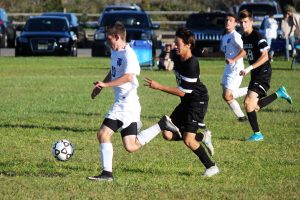 Wildwood Catholic’s Jared Wallace gets ahead of an EHT defender to create a chance in the second half.

The teams traded chances for much of the rest of the match, with Wildwood Catholic carrying play more consistently as it grew into the game.

EHT got a boost midway through the second half when Tyler Waller stopped Beck Lindsay’s penalty kick with a dive to his right. Lindsay took the spot kick after teammate Taylor Ohntrup was taken down in the penalty area.

Later, Lindsay missed the right post and crossbar by a couple yards while under duress from two EHT defenders. Taylor Ohntrup also sent a good chance over the bar. Jarred Wallace also missed an equalizer when his shot was cleared off the line by an EHT back after he beat Waller to his left.

And in the dying embers, Wallace’s sublime delivery into the penalty area from 40 yards was headed over the crossbar by teammate Rakim Coyle, who had risen above all challengers to meet the ball as it arrived.

Wildwood Catholic fell to 6-3 with the loss.

Saioni, in his 10th season as Wildwood Catholic’s coach, enters Tuesday’s contest against Cape May Tech at 99-67-8.