CAPE MAY COURT HOUSE – Seniors Will Berger of Lower Cape May and Alexa Weber dominated the respective boys and girls races at the Cape May County high school cross country championships at county park Friday afternoon.

Berger set a course record with a time of 15 minutes, 57 seconds to finish ahead of seven straight Ocean City runners to win the boys race. The previous course record of 15:58 was set by Middle Township’s Ryan Herlihy in 2014. 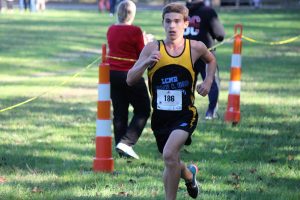 Will Berger of Lower Cape May won the Cape May County boys cross country championship on Thursday at county park.

Ocean City won the boys team title for the third straight year and for the 16th time in the last 17 years.

Weber won the girls race for the third straight year. She finished in 18:44, more than 30 seconds ahead of teammate Casey McLees, who was second in 19:15. Ocean City’s Alexis Palmieri (19:17) and Michaela Baker (19:39) were, third and fourth, respectively. 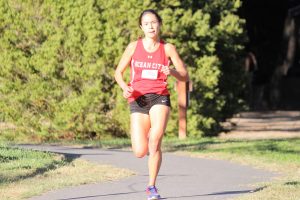 Ocean City won its eighth straight team championship with 19 points, finishing ahead of Wildwood Catholic (39), Cape May Tech (85) and Middle Township (110). Lower Cape May did not have enough runners to score as a team in the girls race; Wildwood does not have any female runners.

— story and photos by Brian Cunniff; videos by Bob Maschio