Berger fifth at state meet, will run in Meet of Champions

Lower Cape May Regional High School senior Will Berger was the only Cape May County runner to qualify for this weekend’s Meet of Champions at Holmdel Park.

The Meet of Champions race, which includes the top three teams and top 10 individuals (plus wild-card entries) from last Saturday’s state championship meets, will be held Saturday at Holmdel Park. 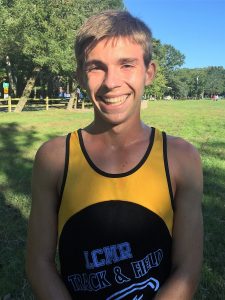 Berger posted a time of 16 minutes, 41 seconds, to place fifth in the Group II meet last Saturday, also at Holmdel Park. Devin Hart of Point Pleasant Boro won the Group II race in 15:34. The only other South Jersey runner to finish ahead of Berger was Haddonfield’s Martin Riddell, who placed third in 16:35.

Cape May Tech’s Leo Zaccarria ran the Group I boys race and placed 55th in 18:20.

Both Ocean City teams competed in the Group III races at the state championships but neither did well enough to advance to the Meet of Champions. Senior Jesse Schmeizer led the Raider boys with a 35th-place finish in 16:58 and senior Alexa Weber paced the Raider girls with a 21st-place effort in 19:58. Teammate Casey McLees, a sophomore, posted the same time and finished 22nd.

Wildwood Catholic’s boys team also participated in the Non-Public B race. Junior Chris Johnson led the Crusaders with an 18th-place finish in 18:11.