Four from this area are finalists for NJ sports media awards

Because of their sheer number of swimmers and a high level of talent, Ocean City’s teams figure to be the class of Cape May County high school swimming for the 2017-18 season.

The Raider girls team, state finalists a year ago, welcome in a new head coach.

Further south, the boys and girls teams from Cape May Tech and Middle Township should be competitive in the Cape-Atlantic National Conference.

Lower Cape May enters a new era with its program, fielding separate boys and girls teams for the first time after traditionally competing as a coed team.

Wildwood Catholic remains a coed team, but the Crusaders’ numbers have increased over recent seasons.

Some of the county teams are in action as early as Friday. Others begin the season by early next week.

The following is a look at each of Cape May County’s high school swimming teams:

Cape May Tech boys coach Matt McElroy is happy with his team’s depth as the 2017-18 is about to commence. 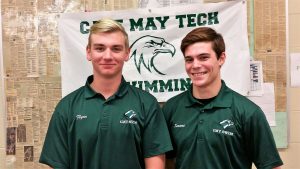 Junior Tyler Flynn (left) and senior Sean Wilson are the captains of the Cape May Tech boys swim team.

Cape May Tech may not have as many elite swimmers as some of the other teams. But McElroy believes his team’s depth may allow them to win quite a few meets in the Cape-Atlantic National Conference.

“There is so much competition in our conference,” he said. “We can compete for the conference title or we could finish near the bottom. It’s that close. I think we have a lot of depth and we could get a lot of points from the outside lanes.”

Cape May Tech’s girls team is led by senior captains Hannah Wilcoxen (all-around) and Maddy Ruisch (breaststroke, IM), who are among the team’s most experienced swimmers. Senior Miranda Fisher (sprint freestyle, IM) is also expected to score points for the club. 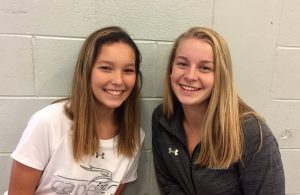 Cape May Tech has 20 swimmers out for the team, which finished 4-4 in dual meets last season.

“Our captains and our seniors are our leaders and we’ve got Lindsay as a freshman. She might score a bunch of points for us,” said Cape Tech girls coach Chelsea Barber. “We missed the (state) playoffs last year but we hope to make it this year.”

Cape May Tech’s teams open the season Friday with a home meet at 4 p.m. against Lower Cape May. The Hawks’ home pool is the aquatics center at the Cape May County Special Services School District building.

The big news surrounding Lower Cape May is the program moving from a coed team to separate boys and girls teams. 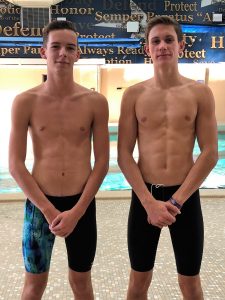 Juniors Kolby Carter (left), Zach Long and Jack Perry (not pictured) are the captains of the Lower Cape May boys swimming team.

O’Donnell said 17 athletes are out for the boys team.

The girls team is led by seniors Carlie Eckel and Maggie Roth and junior Christina Adams. All three are serving as team captains. Others expected to score consistently include sophomores Irish Sanchez and Sam Downes.

The girls team has 26 swimmers out, O’Donnell said. 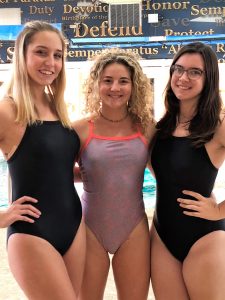 The captains of the first-ever girls swimming team at Lower Cape May are (from left) senior Carlie Eckel, junior Christina Adams and senior Maggie Roth.

“We’re going to have some open lanes,” O’Donnell said. “We knew separating the teams was going to be a challenge. We’re hoping to see improvement and the kids are all going to get a chance to swim more things now that there are more events to fill with us now having separate teams.”

Lower holds most of its practices and its home meets at the U.S. Coast Guard Base pool facility in Cape May.

Lower Cape May opens its season Friday at 4 p.m. at Cape May Tech.

Middle Township lost quite a bit from both its boys and girls teams to graduation but both teams still expect to be rather competitive in the National Conference.

The boys team is led by seniors Tathya Modi, Sean Geary, Zach Hurtado, Rob Giulian and Calbe Maguire. Many of them were key point scorers last year and are hoping to make even more of an impact this winter.

The boys team has 16 swimmers on the roster.

“I think the boys can have a better than .500 season, even though we lost a lot,” coach DeDe Bosacco said. “I think we have a little more depth and we’re a little more versatile. We hope they can make the state playoffs again.” 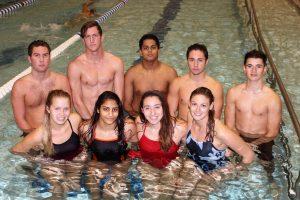 With 26 swimmers out, the Middle girls team also has good depth.

“Even though we lost nine seniors, we think we can compete for the CAL National Conference,” Bosacco said of the girls team. “We were second last year. Maybe we can get over the hump. Of course, we hope to make states, too.”

Middle, which swims at the Cape May County Special Services School District pool facility, opens the season Tuesday at 3:45 p.m. against Cape May Tech.

Ocean City has a new girls swim coach in Ian Keyser and he is being welcomed by a talented team. It is true that Amanda Nunan, the best swimmer in the state the last two seasons, has moved on to the University of Tennessee and Aleva Parker and McKenna Robel are also gone. But senior Ryan Styer, a South Carolina recruit, and Maggie Wallace, an Indiana recruit, are both back. Styer won the NJSIAA Meet of Champions in the 50 freestyle and is great in the sprints. Wallace is strong in the distance events and finished second to Nunan in the 500 freestyle at last year’s MOC. Throw in junior Andrea Teofanova, whose freestyle skills made the Raiders champions in the relays, and you’ve got quite a threesome.

“That’s about as good as it gets,” said Keyser, who takes over for Steve Warrington as the head coach. Warrington, 24-2 in two seasons, got a new teaching position in Hamilton Township. Keyser comes to OCHS from Montville High School, where he was the boys coach. He grew up in Upper Township, swam at St. Augustine Prep and later Seton Hall University.

In addition to the big three, Keyser has a trio of sophomores – Eve Chiarello, Brynn Bowman and Emily Myers – who return with experience and freshman Alex Antonov, whom he expects will be a factor right away.

The Raiders are ranked No. 7 in the state by NJ.com in the pre-season. They will host No. 14 Egg Harbor Township in December and will visit No. 3 Bishop Eustace in January. Other non-league meets are with Woodstown and Sterling.

Shane McGrath (31-18) returns for his fifth season as the head coach of the Ocean City boys. He lost Pat Kistler, Ryan Kelly and Clay Mitman to graduation and senior Dan Nunan, who has committed to the University of Delaware for baseball, has decided not to swim. But junior Nate Hays, the top scorer on the team last year, is back along with juniors Ben Wiley and Brian Walsh and seniors Matt DiMarino and Doug Grisbaum.

Three sophomores – Ethan McCarron, Max Carter and Tanner Driscoll – and a pair of freshmen – Steve Gooden and Dolan Grisbaum – are also expected to add depth to the Ocean City lineup. The Raiders frequently used their depth to win during last year’s 9-4 season. They will find out quickly how good they are this year. They open the season on Tuesday against Mainland, the two-time defending state group champions and the No. 1 overall team in the state last year.

“They (Mainland) lost some good swimmers,” McGrath said, “but they have a great depth of talent. The last few years I think our team was a bit intimidated by them but I don’t get that feeling this year. Our kids are fired up and ready to face them. Swimming against the best just makes you swim faster.”

McGrath’s Raiders have a pretty amazing December schedule. After Mainland on Tuesday (the Mustangs are ranked No. 6 in the state by NJ.com) they go to No. 7 St. Augustine Prep on Dec. 15 and host No. 14 Egg Harbor Township on Dec. 20.

That’s three of the top 14 teams in the state within 15 days.

Wildwood Catholic begins the new season with a much larger team in terms of number of athletes compared to recent seasons, with more than 30 swimmers out for the team according to head coach Chris Gamble. 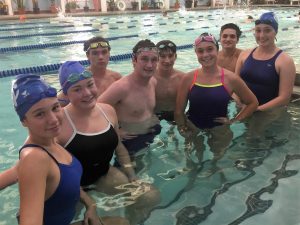 The Crusaders open their season Friday at Holy Spirit.

“With our numbers up, we’re looking for a competitive, fun dual meet season,” Gamble said. “We have a good corps of returners and a lot of new kids out to give it a try so we’re looking good as far as numbers.”