Wildwood Catholic High School has turned to one of its own to head its baseball program.

Jim Norris, a 2010 graduate and former four-year varsity player at the school, has been hired as the school’s new head baseball coach, the school announced earlier this month.

Norris takes over for Dr. John Coyle, who stepped down after three seasons last spring.

Norris was an assistant coach under Coyle in the 2016 season.

“When I was an assistant coach two years ago, I felt at the time that I could help out with the program even more if I got the chance,” Norris said. “After (Coyle) left, I felt that Wildwood Catholic needed a coach who knew the local ties and understood Cape May County baseball. I thought I could help.”

Norris takes over a program that has struggled to gain traction in the competitive Cape-Atlantic League, winning just a handful of games each season in recent years. The 2017 team went 3-14. 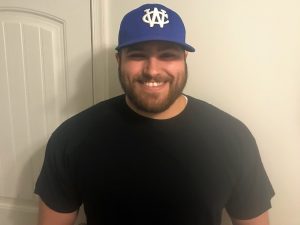 One of the program’s major issues is that it does not have a practice or game field near the school. The team has practiced and played at numerous fields throughout the county over the past decade. It now practices and plays home games at a field located at the eastern edge of Cape May County Park in the northern end of Cape May Court House, about a 15-minute drive from the school.

“I think the biggest challenge has to be the fact that we don’t have the facilities compared to the other local schools,” Norris said. “Our enrollment is lower, too, so we don’t have as many kids to pick from for baseball and at our school we have kids that play multiple sports. And at a school that (the students) pay tuition, a lot of kids need to start working in April and May to make money. So there are some challenging aspects around baseball at Wildwood Catholic.”

At this juncture, Wildwood Catholic is not a championship level program. But Norris hopes to make the Crusaders as competitive as possible while also developing some good players.

“I’m not focusing primarily on wins and losses, especially right at the beginning,” Norris said. “My primary focus is to get kids interested who want to succeed in baseball and play at the next level and try to get them to the next level. I hope we can win a few more games than we did last year and go out and play respectfully and as hard as we can. If the kids go out and wear the colors of Wildwood Catholic proudly and play as hard as they can, then I’ll be really happy.”

Norris, a pitcher and first baseman when he played at Wildwood Catholic, currently works for a computer company in the Atlantic City area.

Bill Piotrowski will serve under Norris as an assistant coach.