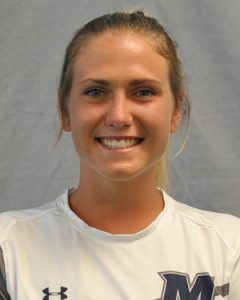 Lower Cape May Regional High School graduate Madie Gibson recorded a goal and an assist to help the Monmouth University women’s soccer team to a 5-1 win over Manhattan in the Metro Atlantic Athletic Conference Tournament championship game on Wednesday.

The tournament was played at Disney’s Wide World of Sports in Lake Buena Vista, Fla.

Gibson assisted on the team’s second goal by sending a cross from the left wing that was knocked into goal by teammate Rachelle Ross. She later scored the Hawks’ fourth goal by blasting a curling shot inside the right post from 20 yards.

The MAAC championship is the second straight for top-seeded Monmouth (15-3-2), which has gone unbeaten over its last 15 games away from home against MAAC opponents (14-0-1) dating back to last season.

The MAAC Tournament title gives Monmouth an automatic bid to the NCAA Tournament, which is scheduled to begin next week.

The goal was the seventh of the season for Gibson, a redshirt sophomore forward. She has scored in four consecutive games. She now has five career goals in MAAC Tournament play.

Gibson scored the lone goal in Monmouth’s 1-0 win over Rider in the opening round of the tournament and also scored a goal in the team’s 3-1 result over Siena in the semifinal round.

Gibson has seven goals and nine assists on the season, tops on the team in both categories. She was recently named a first team MAAC selection for the second consecutive year. She was also the MAAC Rookie of the Year last fall.

Gibson has started 41 consecutive games for the Hawks.

A 2015 graduate of Lower Cape May, Gibson holds the Cape May County career scoring record for girls soccer with 126 goals and helped the Lady Tigers win consecutive Cape-Atlantic National Conference championships as a junior and senior. She also surpassed 1,000 career points in basketball, helping Lower Cape May win its first South Jersey championship during her senior season. Gibson also scored more than 125 career goals in lacrosse.

Gibson took a medical redshirt season in her first year at Monmouth after suffering a knee injury in the spring of her senior year at Lower Cape May.