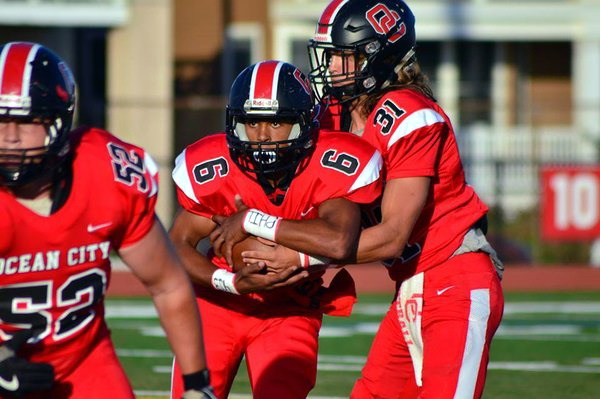 The Ocean City High School football team may have lost its South Jersey Group III playoff game to Delsea, but the Raiders created what will undoubtedly be one of the great memories of the 2017 South Jersey high school football season.

On the final offensive play of the first half, the Raiders perfectly executed a hook-and-lateral play that resulted in a touchdown from 53 yards away. With the ball at the Ocean City 47-yard line, Raider quarterback Harry Pfeifle threw a pass to receiver Bobby Shallcross near the Delsea 40-yard line. Shallcross caught the ball and quickly flipped it back to a cutting Issac Robertson, who ran 44 yards down the right sideline for a touchdown.

This video clip taken by Matt Ulmer, with play-by-play provided by Tom Williams, has whipped through the South Jersey football community and even was featured as part of NBC-10 Philadelphia’s sports highlights.

For a more detailed description of the play, check out this post on the Ocean City High School football team’s website: http://www.ochsfootball.com/teams/default.asp?u=OCEANCITYREDRAIDERFO&s=football&p=NewsStory&newsID=56018