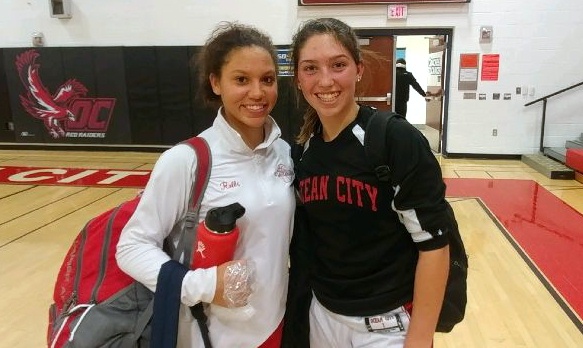 Ocean City junior Danielle Donoghue scored 22 points, including a three-pointer and some key free throws in overtime, as the Raiders defeated Middle Township, 47-43, tonight in the season opener at the Dixie Howell Memorial Gymnasium.

The game was a re-match of the 2017 Cape-Atlantic League championship game, which Ocean City also won in overtime at Stockton University in February.

The Raiders had a two-point lead in the closing seconds of the first overtime after Donoghue drilled a three. But Middle sophomore Kira Sides his a running one-hander with three seconds left to tie the score. She was fouled but missed the free throw.

Ocean City, which once led in the game by 11, opened a seven-point lead in the second overtime period.

Senior Kilie Wyers was a big factor for the Raiders, especially early in the game, in attacking the Middle zone. She hit a couple three-pointers and finished with 12 points. Senior Mickey Baker scored six, sophomore Emma Finnegan added five and junior Tori Rolls, playing in her first varsity game since breaking her collarbone in the season-opening soccer game in September, added two.

The two teams will play back to back on Sunday in the same gym during the 20th annual Ocean City PBA Tipoff Weekend. Middle will play Haddon Township at 3:15 in the Dixie Howell Gym and Ocean City will follow against Atlantic Tech.