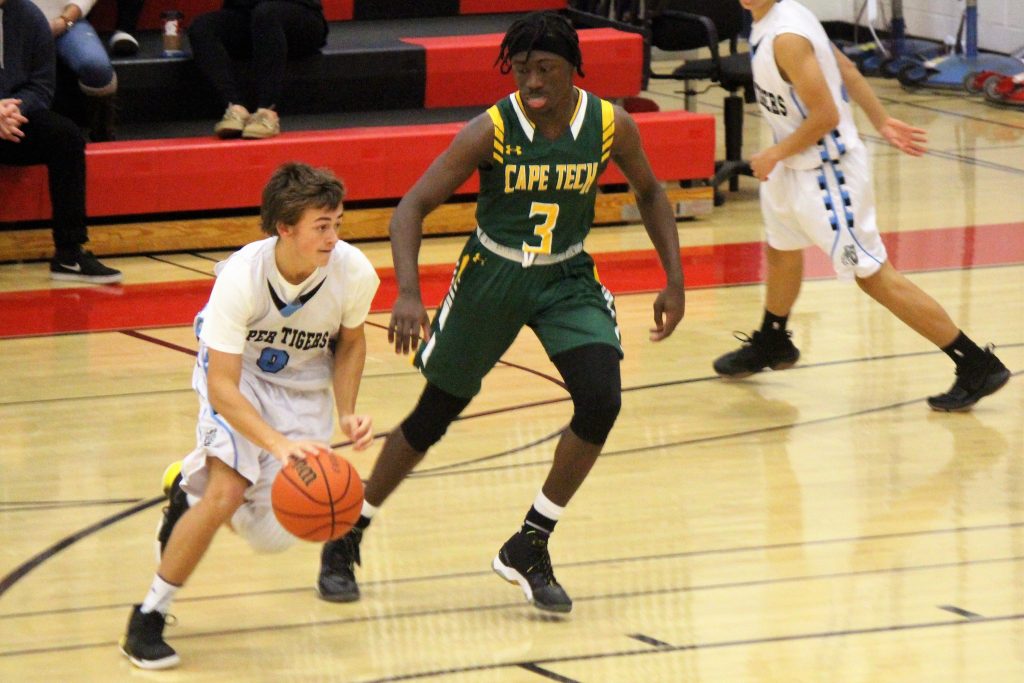 OCEAN CITY – Want to know how good of a shooter Martin Anguelov is?

When the Lower Cape May Regional High School boys basketball team was awarded two technical free throws midway through the fourth quarter of its game on Saturday against Cape May Tech, it was Anguelov, a precocious freshman, who went to the line to make the shots instead of Patrick Holden, an accomplished senior known to knock down his share of pressure foul shots.

So it came as no surprise when Anguelov delivered the game’s biggest moment. The native of Bulgaria – he moved to Cape May a little more than two years ago with his parents and younger sister – calmly rose up and swished a jump shot from the right wing to break a late tie. 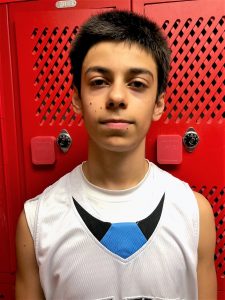 Anguelov’s three-pointer fell through the net with four seconds to play and gave the Caper Tigers a 61-58 victory over the Hawks in yet another down-to-the-wire affair between the two friendly local rivals. The contest was played at Ocean City High School as part of the Ocean City PBA Tipoff Weekend showcase event.

Cape May Tech junior Josh Wright, held to only three points in the first half, knocked down a critical three-pointer with a little less than 30 seconds to go to tie the game at 58-58. He finished with 15 points.

Following a lengthy timeout while the game officials rectified an error at the scorer’s table, Lower worked the ball around the perimeter until Holden found Anguelov free and ready and willing to shoot.

“I practice that shot every day, so I’m confident in my ability to make it,” said Anguelov, who speaks English fluently thanks to private tutoring sessions before he moved to America. “I decided that if my teammates found me that I have to shoot it and knock it down.”

Anguelov led all scorers with 17 points. He shot 5 for 11 on three-point attempts.

Holden, who averaged 24.2 points per game last season as a junior, was held to zero second-half field goals and finished with 13 points. But he often set up his teammates – Anguelov in particular – and dished out 10 assists against only one turnover.

“I think we have a lot more people that can score this year,” Holden said. “I just want to do what I can to help us. If that means I’m going to score a little less, I’ll be glad to take that hit if it means we’re going to get the win.”

The game was billed as a matchup between two of South Jersey’s better guards in Holden and Wright. But with each team doing its best to limit the other team’s star, others stepped to the forefront. In addition to Anguelov’s output, junior Pat Moore added 15 points for Lower Cape May. For Cape May Tech, sophomore James Longstreet scored 15 points and claimed a game-high 10 rebounds and senior Ray Abbott added 14 points and eight assists.

“We know Josh is going to draw a lot of attention because other teams’ No. 1 objective is going to be to stop Josh, Cape Tech coach Josh Mercado said. “We always say to the other kids that that’s their chance to step up. It’s their opportunity to put up points. Our guys were ready for that.”

Mercado said he was impressed with the play of both Holden and Wright despite both being limited in their shot attempts.

“Of all the good players we have in our area, Pat really stands out because of the way he makes his teammates better. He’s so good at that,” Tech coach Josh Mercado said. “And Josh, when he’s seeing the floor the way he can, he can be the same way for us.

Lower Cape May and Cape May Tech played each other twice last season, with each team winning once. The combined margin of the two results was just six points. So it was no shock to see the teams engage in a game in which the lead changed hands 11 times and the score was tied eight times.

“This is such a great rivalry because the kids all play together,” Mercado said. “They go to the local recs together, they all know each other and they’re all friends. It’s a friendly rivalry that brings out the best in each other.

“This is a tough loss for us but they won 18 games last year, so for us to be right there with them it’s a step in the right direction. We just have to push forward and get better from here. Hopefully the next time we play them (on Jan. 5) we can somehow come out on top. But I’m sure either way it’ll be another three- or four-point game.”

BASKETBALL SHORTS: Lower Cape May shot 9 for 24 on three-point shots. In addition to Anguelov’s efforts, Moore made 3 of 8 attempts from that distance. … Holden’s 10 assists broke the Tipoff Weekend record of nine set by Atlantic City’s Tory Cavalieri in 1999 and matched by Lower Cape May’s Jon Gary in 2005. … The teams combined for only 13 turnovers. Lower had just four.