County teams compete in Battle at the Boards 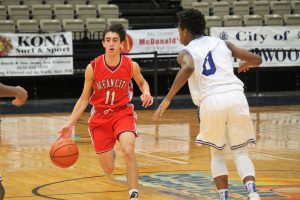 But the Raiders did it without leading scorer Tom Jamison. The six-foot senior injured his shoulder three minutes into the game and never returned. Initially, it was believed he dislocated the shoulder but further examination was scheduled. Jamison had scored 43 points in the first three games, a 14.3 average.

Burlington City (2-1), which had most of its team back from last season’s Central Jersey Group 1 champions, never led in the game after the first minute of the first quarter. The Blue Devils tied the game twice – the last time at 25-25 early in the third quarter. They got the Ocean City lead down to three points (53-50) on an offensive put-back with 1:43 left in the game. But the Raiders (3-1) controlled the ball effectively, running the clock down to 24 seconds before Burlington City fouled junior Luke Varallo. He made both shots. Then, after senior Issac Robertson grabbed a defensive rebound, he was fouled and added another point from the line.

“It hurt us not having Tom (Jamison) out there,” said OCHS coach John Bruno, “but everybody stepped up – especially Issac.”

The Raiders shot 53 percent in the game and 44 percent from three-point range. Burlington City shot 34 percent overall and 22 percent on 27 three-point attempts. D’Andre Thurmond led the Blue Devils with 21 points and 14 rebounds.

Burlington City is coached by Paul Collins, whose 737 career victories place him third in South Jersey history behind Paul Rodio of St. Augustine and the late Clarence Turner of Camden.

FREE THROWS: Both OCHS teams play Tuesday in the opening rounds of the Boardwalk Basketball Classic – the girls play Hatboro-Horsham (PA) in the GWITDA Bracket at 11:00am and the boys play Conrad (DE) Sciences at 5:30pm in the Ray Martin Bracket. Both teams will play again on Wednesday with the opponent and starting time dependent on Tuesday’s results …. box scores, schedule, results, stats and more are available at http://www.oceancitysports.com/OCDiary.html.