VIDEO PREVIEW: Middle striving to be back among CAL’s elite 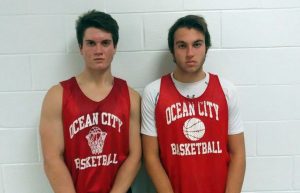 The Ocean City High School boys basketball team won 18 games in each of the last two seasons. The last time an OCHS team won that many in consecutive seasons was in 1982-84.

The Raiders qualified for the Cape-Atlantic League tournament both years, losing to Wildwood Catholic last year and Atlantic City in 2016.

But John Bruno (371-337 in 28 seasons, fourth all-time in CAL wins) watched a lot of players graduate in June.

The Friday season opener at Vineland was postponed because of weather concerns. The Raiders will now open the season on Sunday (7pm) against Pleasantville in the Dixie Howell Memorial Gymnasium.

The current Ocean City team will be without Luciano Lubrano, who is the 10th highest scorer in school history, plus No. 2 scorer and rebound leader Andrew Donoghue and assist leader Luciano Keyes. Also gone are Christian Pates, Jim Flukey, Reed Carlin, Luke Dice and LaShawn Crawford.

The returning starter is junior Luke Varallo, fresh off a CAL championship soccer season. Also back with experience are seniors Tom Jamison and Jake McQuarrie, who both played in every game last year, starting a few. Varallo and Jamison were among the CAL’s top three-point shooters last season. Junior Joey Sacco, who saw action down the stretch last year, also returns.

Joining Varallo, Jamison, McQuarrie and Sacco in the starting lineup during the pre-season was junior Donovan Graham. Seniors Harry Pfeifle and Isaac Robertson, who bring strength and athleticism to the court, have been the first players off the bench. Eric Greenling, a 6-8 sophomore who transferred from Holy Spirit, will be part of the rotation after sitting out the NJSIAA required 30 days. His first game, ironically, will be against Holy Spirit.

This is a quick team, one of the quickest Bruno has had, and they pass the ball effectively – two qualities that will serve them well. But they will likely struggle, particularly for the first month, against teams with good size.

The Raiders were dominated in the pre-season by Shawnee, the consensus No. 1 team in South Jersey going into the weekend. But they competed in other scrimmages. Holy Spirit, which beat OCHS twice last year – both in overtime – will be the team to beat in the National Conference with Lower Cape May expected to be the top challenger. The Raiders also lost an OT game to Lower a year ago. Outside of the CAL Ocean City will play Clearview, Wildwood, Cumberland and Hammonton – plus Burlington City and Conrad (DE) School of Science in Wildwood’s Boardwalk Basketball Classic and Triton, the team that knocked them out of the Group 3 Tournament last year, in St. Augustine’s Shoot Down Cancer Classic.

“We handle the ball pretty well and our defense is shaping up,” Bruno said, “but we just have to figure out how to get the ball off the boards.”

FREE THROWS: Assisting Bruno this year will be Andrew Bristol, Shawn Burke and former players Tom Ballezzi and Brett Johnson …. the Raiders will play four girl-boy doubleheaders this year. The first is Sunday in the Ocean City PBA Tipoff Weekend (5:15) when the girls play Atlantic Tech and the boys face Pleasantville. Later, there will be a home girl-boy doubleheader with Clearview on The Butch Gleason Memorial Coaches vs, Cancer Night and another with Wildwood. In addition, OCHS will play a girl-boy doubleheader with Mainland during the Battle by the Bay in Atlantic City High School …. schedule, results, stats and more are available at http://www.oceancitysports.com/OCDiary.html.