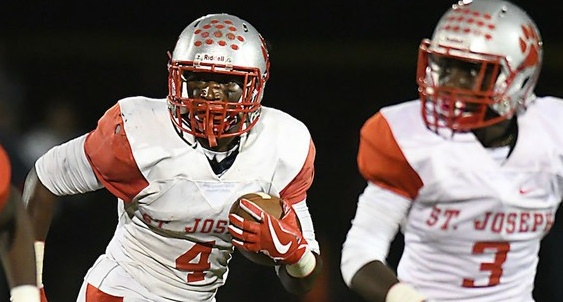 St. Joseph completed its perfect season this afternoon at Rowan University to finish as the No. 1 team in all of South Jersey in the Online 25

Paul Sacco’s Wildcats defeated defending champion Mater Dei Prep, 30-14, with senior Qwahsin Townsel and sophomore Jada Byers each scoring two touchdowns. It was the 49th victory in NJSIAA games for St. Joe and the school’s 26th post-season championship. It was the 31st straight year in which at least one CAL team has won an NJSIAA football championship. CAL teams have won 60 titles in the 43 years of NJSIAA football playoffs. 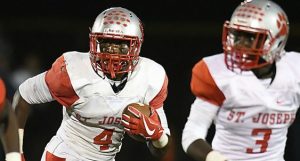 Townsel (No. 4, above) added a two-point conversion in the game to finish the season with 204 points, just the third time a Cape-Atlantic League back has scored more than 200 points. He trails only Holy Spirit grad William Washington (226 points in 2007) and St. Augustine’s Calvin Cass (218 in 2012).

Byers scored 16 points in today’s championship game to finish with 178 points, tied for seventh all-time by a CAL back and the most ever by a sophomore.

Five South Jersey public school champions were also determined over the weekend at Rowan – Lenape in Group 5, Shawnee in Group 4, Delsea in Group 3, Haddonfield in Group 2 and Paulsboro in Group 1.

The complete Online 25 is at http://www.primeevents.net/2017Football25.html.