The first basketball scrimmages are today against Shawnee, the swim teams begin their seasons tomorrow with important meets against Mainland and the wrestlers have a scrimmage at Lower Cape May on Saturday.

You can see a complete list of OCHS winter sports scrimmages and opening games at http://www.oceancitysports.com/OCDiary.html.

It looks like it will be another good winter for the Raiders. And the fall teams have set a high standard for this school year.

A quick glance at those teams would also indicate that lot more success could be ahead next fall. 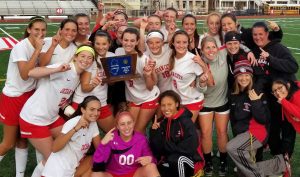 The girls soccer team (19-3-1), for example, will lose Hannah Nathan and Haley Harper from this year’s championship team. But Faith Slimmer, who led the team in scoring and was 14th in South Jersey and sixth in the Cape-Atlantic League in goals, is just a freshman. Only Christine Jack, who scored 22 goals in 1997, scored more as an OCHS freshman. Paige Panico and Kelsey White are also freshmen. Delenay Lappin is a sophomore, Anna Devlin and Natalie Stinson are juniors and goalkeeper Abby Fenton, who tied a school record for shutouts in a season, is a sophomore. And do not forget Tori Rolls, the junior who broke her collarbone in the season’s first game after scoring 28 goals her first two seasons. Her return next year will make the Raiders even better for Coach Kelly Halliday (66-26-3 in five seasons). Lappin, Devlin, Slimmer and Fenton were named first team, all-conference. 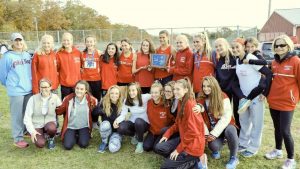 Matt Purdue (91-1 in 10 seasons) has seen his team win 89 straight dual meets since 2008. He will lose Jesse Schmeizer and Korey Greene to graduation but junior Gavyn Fox, sophomores Anthony Conte and Luke Kramer and freshmen Steve Gooden and Tyler Greene are poised to take over the leadership. Schmeizer, Korey Greene, Conte and Fox were selected to the all-conference first team.

The field hockey team (14-8) did not extend the 20-year streak of conference championships, losing tough 2-1 decisions on the road to Mainland and conference champion Millville. But the Raiders played a very tough schedule that included some of the top teams in the state and competed. First-year coach Kelsey Mitchell will lose Shannon O’Reilly, who missed the last third of the season with an injury, to graduation, along with Haleigh Flukey, Lainie Allegretto, Sophia Ritzell and Hailey Stack. But junior Reese Bloomstead, who led the team in goals and assists, returns along with juniors Shannon DeCosta, Sophia Gresham and goalkeeper Maddie Kahn. Also back next fall will be sophomores Chloe Prettyman, Molly Reardon and Morgan Pizagno and freshman Tara McNally. Bloomstead and O’Reilly were named first team all-conference with Kahn and Flukey getting honorable mention.

The girls tennis team (12-9) reached the South Jersey Group 3 semifinals where the Raiders lost to Hammonton, 3-2. Samantha DiMatteo (114-59 in nine seasons) will lose seniors Libby Trofa and Maddie Holmes from her singles lineup and doubles player Rose Malfitano. But freshman singles player Jordan Moyer and juniors Rosalie Graham and Gina Schmid and sophomore Kate Carter will be back in the lineup next year. Trofa was named first team, all-conference.

Look for a review of the OCHS football season later this week on Coast Sports Today.