Jake Baxter (left), Josh Antorino and Dominic Robertson are the captains of the Lower Cape May wrestling team.

A new high school wrestling season in Cape May County begins this weekend.

All three county teams are scheduled for action, each competing in separate tournaments. Lower Cape May is at Paulsboro, Middle Township is at Haddon Heights and Ocean City goes to Gateway.

The first dual matches for each club are scheduled for next week.

The following is a look at the three Cape May County high school wrestling teams:

The Caper Tigers begin the season under a new coach in Billy Damiana.

While he may be a new leader, he certainly is no stranger to the program. Damiana is a 2009 graduate of Lower and is the school’s all-time wrestling wins leader after posting a career record of 137-20. He twice stood on the podium as a top-eight finisher at the state championships. 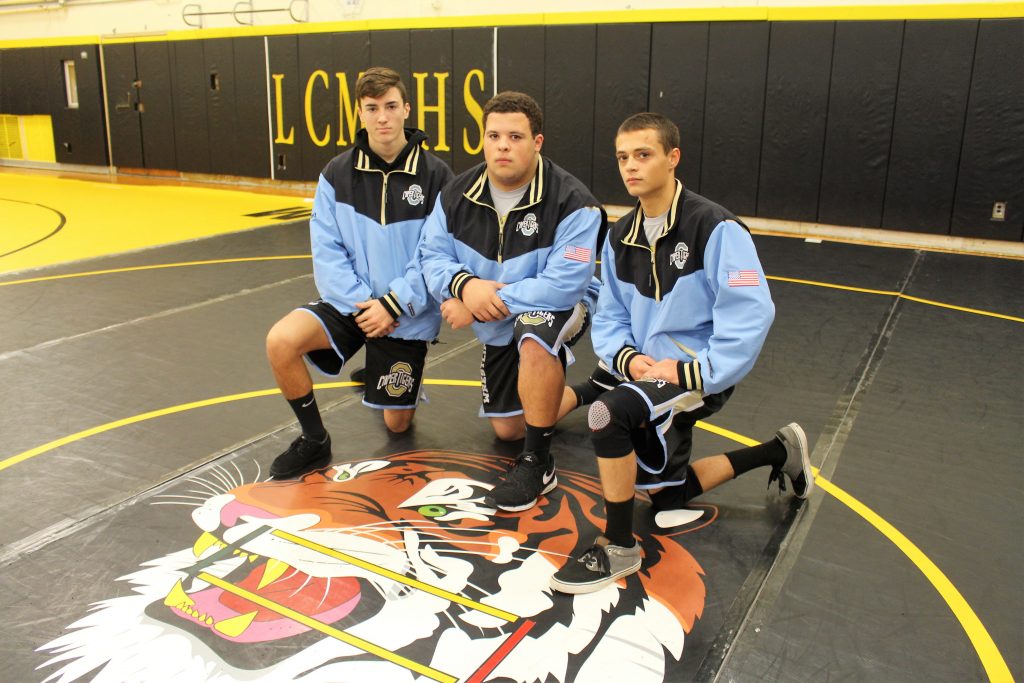 Jake Baxter (left), Josh Antorino and Dominic Robertson are the captains of the Lower Cape May wrestling team.

Damiana inherits a rather inexperienced team, but one that has much greater numbers than in recent years. More than 30 athletes are out for this year’s club, including 13 freshmen.

“We have a lot of young guys coming in trying to make a difference,” Damiana said. “We don’t have a lot of upperclassmen with experience.”

“Those guys did a lot of wrestling this summer with the camps and they have a lot of experience under their belts,” Damiana said. “We’re definitely looking toward them for leadership and for them to try to make a run toward (the state championships in) Atlantic City.”

Others with some experience include sophomores Cameron Leslie (126) and Jonas Lumbruno (160/170) and senior Tony Kapurelos (182). Leslie and Kapurelos were in the varsity lineup last season while Lumbruno is back out in the sport after wrestling while in grammar school.

Quite a few freshmen are vying for varsity positions. Some of the most promising newcomers include Wesley Tosto (106), Devon Bohn (106/113) and David Tosto (120).

“Even though they’re freshmen, they have lots of experience,” Damiana said. “We’re expecting them to make immediate impact.”

Following this weekend’s tournament at Paulsboro, Lower Cape May will wrestling its first dual match of the season next Wednesday at home against Oakcrest.

“This is a learning year for us but at the same time our goal is to go out and do the best we can and be better after the first month or so of the season,” Damiana said. “One of my goals this first year was to get the number of kids out up and I’m happy we’ve been able to do that so far. I like that we’re getting some kids out from other sports. I think that’s really good for us.”

Matt Wolf is now in his 10th season coaching wrestling at Middle Township High School. This might be his best team.

“On paper, this is the best team we’ve had in my 10 years,” Wolf said. “We’re a little thin in spots. We don’t have a lot of extra guys in a lot of a weight classes, so we have to stay on the mat health-wise. But we should have a good year.”

Middle was a result over .500 in dual meets last season at 13-12 and should be able to improve upon that. 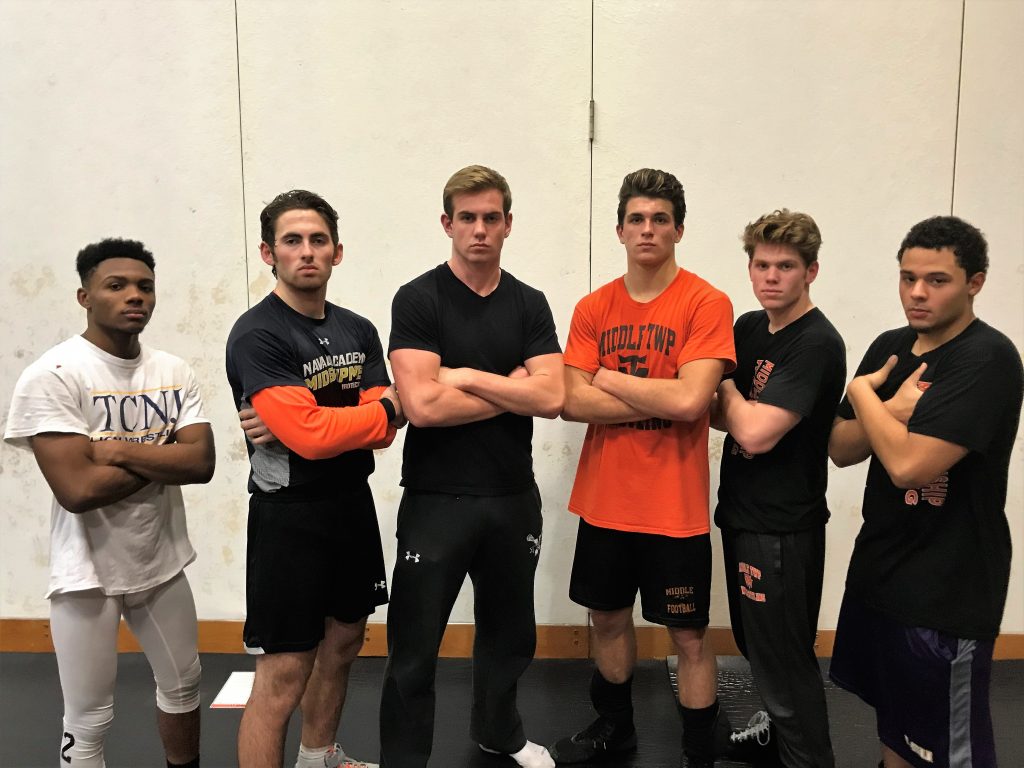 Leading the way are seniors Gary Nagle (170) and Austin Cominsky (195), who return as defending District 30 champions. Nagle won 37 matches and Cominsky won 34 a season ago.

“Those are guys that have some experience and we’re hoping all of them can show some improvement and take the next step,” Wolf said.

“Our (practice) room is much tougher this year,” Wolf said, “and we’ve had some tough scrimmages to help prepare us for the season.”

Following Saturday’s tournament at Haddon Heights, Middle will have its first dual meet on Tuesday at Cedar Creek.

Ocean City went a solid 15-6 in dual matches last season but did not enjoy much individual success in the postseason. With quite a few varsity starters back, the Raiders are hoping for more this winter.

“I think we should have some success,” said 10th-year Raider coach Dave Castellini. “We graduated four guys from last year but we have nine starters back and a couple strong newcomers.” 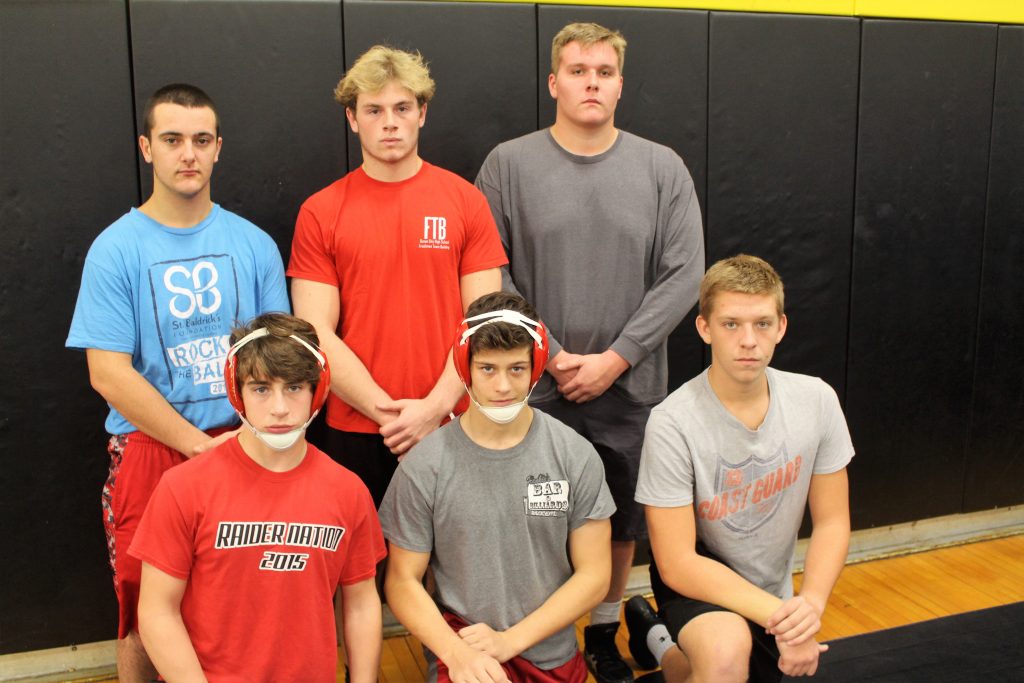 All of the returning wrestlers won at least 10 matches last season.

Ocean City will strive to be among the better teams in the Cape-Atlantic American Conference, one of South Jersey’s tougher leagues.

“We should be competitive,” Castellini said. “St. Augustine and Egg Harbor Township are always very tough and Mainland’s good, too. We’re probably very similar to a lot of the teams we’re going up against.

After the tournament at Gateway on Saturday, Ocean City opens its dual meet season next Wednesday at St. Augustine.