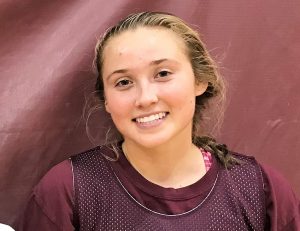 The junior point guard scored 16 points, pulled down 12 rebounds and dished out 10 assists in the Lady Warriors’ 46-16 win at Clayton.

It was initially reported immediately following the game that McCracken had finished one assist shy of a triple-double. But a review of the game video by the Wildwood coaching staff revealed that McCracken did in fact have an extra assist that wasn’t originally recorded.