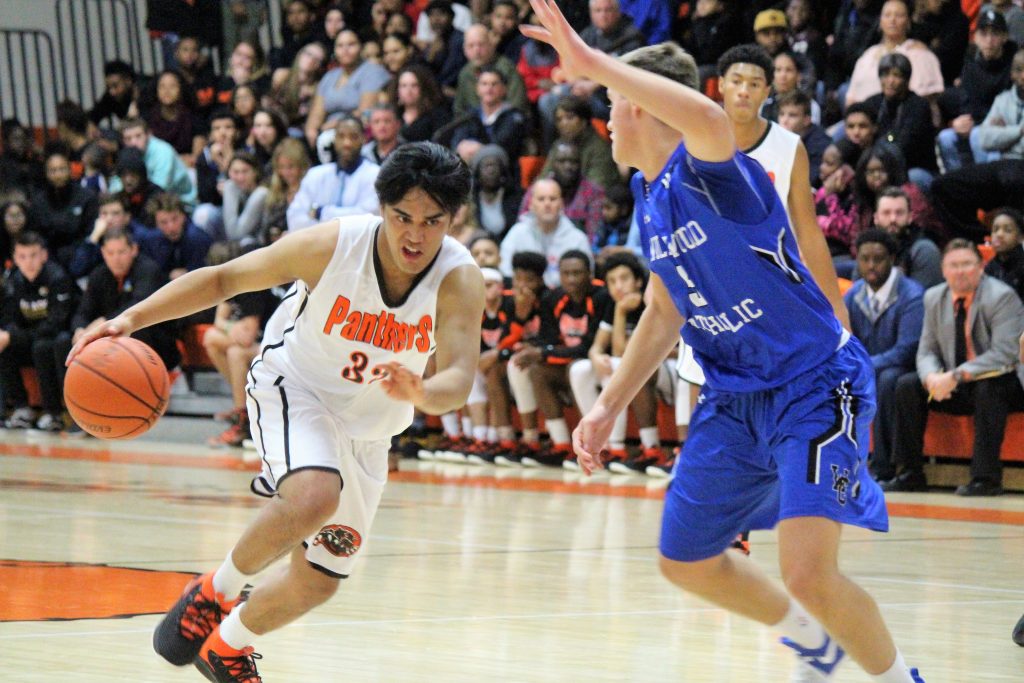 CAPE MAY COURT HOUSE – It was another stellar defensive effort for the Wildwood Catholic High School boys basketball team.

The Crusaders held rival Middle Township without a field goal for a nearly 10-minute stretch of the game in rolling to a 61-37 victory Tuesday in front of a capacity crowd in the first Cape-Atlantic United Conference contest of the season for both teams. The win came two days after an impressive win over Teaneck, which entered the season ranked 18th in the state by nj.com.

“This was a big win against a rival school,” Wildwood Catholic coach Dave DeWeese said. “I thought our defense in the first half was outstanding.”

Wildwood Catholic’s Charles Fields shot 10 for 18 from the floor and scored a game-high 22 points. He had 10 in the third quarter alone.

“I think out of all our guys, he probably played with the most energy,” DeWeese said. “He was aggressive at both ends of the floor. In the second half I thought he made some better decisions with his attacks to the basket, especially in the third quarter.”

Despite the decisive victory, DeWeese wasn’t particularly happy with his team’s effort on the offensive end.

“I didn’t think we played very well,” he said. “I thought our offensive execution was very poor. We didn’t seem to be able to run a lot of our stuff.

“We got out to a big lead and then we relaxed and I don’t think we played with the same intensity level. So from that perspective it was a little disappointing.”

Taj Thweatt added 14 points for Wildwood Catholic. His last two came on a thunderous dunk off a lob pass from Jacob Hopping in the final 15 seconds. Caleb Fields was also in double figures with 11 points.

“It was definitely a slow start for us offensively,” Middle coach Anthony Farmer said. “We couldn’t throw the ball in the ocean in the first half.

“Our message to the kids is just continue to get better every day. We haven’t found our niche with sharing the basketball yet and we didn’t execute very well. I know this is a big rivalry. It’s Middle-Catholic so that makes it a big deal. But at the same time this is only the third game of the season. We just want to get better game by game.”