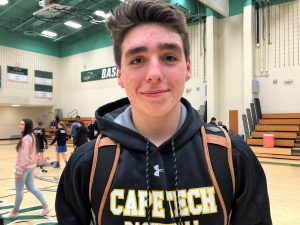 CAPE MAY COURT HOUSE – The Cape May Tech boys basketball team did it again.

For the second straight year, the Hawks upset a Cape May County rival, this time taking down Middle Township in a wild contest that needed overtime. Freshman Aiden Hofmann sank a pair of free throws with five seconds to play in the extra session and the Hawks survived a 35-foot heave by Middle that nearly found the basket at the buzzer to post a 56-55 victory.

“This is the biggest win of our season. It has to be,” said Hofmann, flashing a smile as wide as the Garden State Parkway. “This could change our whole season around.”

Despite returning many of its top players from a season ago, Tech entered the game at just 4-7. Middle, meanwhile, came in having won three straight and was 7-4.

But Tech was up for the challenge from the start. The Hawks raced out to a 12-4 lead, took a 22-21 advantage into the halftime and led 42-38 after three quarters.

Coley Holton’s basket in the lane gave Middle a 49-48 lead – its first of the fourth quarter – with 2:18 remaining. Cape Tech’s Josh Wright made a tough layup on his team’s next possession to put the Hawks back ahead by one.

DeSean Lopez answered for Middle, sinking a right-wing three-pointer to put the Panthers ahead by two at 51-49 with a little more than a minute to play. But Tech tied the game only moments later, Wright whipping a pass from halfcourt to James Longstreet under the rim. Longstreet’s layup represented the last points scored in regulation as Middle’s Jalen Freeman missed a contested foul-line jumper as time expired.

Middle got a basket from Mack Selby and two free throws from Freeman to go ahead, 55-51, with three minutes to play in the extra period, but the Panthers wouldn’t score again. Longstreet made a jump hook in the lane, followed by a free throw by Devon Roach. Freeman missed the front end of a one-and-one opportunity with 11 seconds to go and Hofmann was fouled with five seconds left after driving into the lane. He swished both shots.

“I knew I had to make at least one (to tie),” Hofmann said. “But when I made that I felt like I got in a groove and made the second one.”

Following a timeout, Selby pushed the ball into the frontcourt for Middle but his running 35-footer hit the back of the rim and bounced away as the buzzer sounded.

That allowed the Hawks and their fans to celebrate another stunning upset of a county rival. The Hawks also beat Wildwood Catholic by a point last season.

Wright sank 22 points to pace Cape May Tech. He had 11 in the third quarter. Hofmann and Longstreet each added eight points.

Freeman scored 22 points for Middle. Lopez added 11, all in the second half, and Holton chipped in nine.

Middle made just 22 of 60 shots from the floor overall and was only 3 for 17 from three-point range.