WINSTON-SALEM, N.C.  – Gregg Lerner of MSG-Varsity and Tom Williams of Prime Events have been named 2017 Sportswriter and Sportscaster of the Year in New Jersey by the National Sports Media Association.

Thomas Boswell, Woody Durham, Bryant Gumbel and Dick Weiss have been voted into the NSMA Hall of Fame, executive director Dave Goren announced. Goren also said that NSMA members voted Kevin Harlan as the 2017 National Sportscaster of the Year and Adrian Wojnarowski as the 2017 National Sportswriter of the Year. They will be honored during the 59th annual NSMA Awards Weekend, June 23-25, in Winston-Salem. 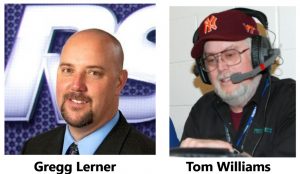 Williams, the play-by-play voice, producer and online coordinator for Prime Events, who does play-by-play on 97.3-ESPN and for Coastal Broadcasting and Coast Sports Today, won the state award for the 10th time, the most in New Jersey history. He had been tied with former NJ Network anchor Pat Scanlon and Kevin Williams of WOBM for the most wins in the 59 years the awards have been presented. The other state sportscaster finalists were Mike Gill of 97.3-ESPN and Mike Frankel on SNJ-TV.

Lerner previously was named the state’s top sportswriter in 2011 while working for the Star-Ledger in Newark. He was selected this time for his detailed and close-up coverage of high school sports with MSG. The other New Jersey sportswriter finalists were Dave Weinberg of the Press of Atlantic City and Steve Politi of NJ.com.

Boswell is one of the pre-eminent baseball writers in the country, having served as a Washington Post sports columnist. Durham is best known for the 40 years he spent as radio play-by-play announcer for University of North Carolina football and basketball. Gumbel’s sports broadcasting career has taken him from KNBC-TV in Los Angeles to NBC, CBS, PBS and HBO. He has hosted “Real Sports With Bryant Gumbel on HBO since April 1995. Weiss, known as “Hoops” to generations of basketball fans, worked for the Philadelphia Daily News and New York Daily News, covering college football and college and professional basketball for a total of 40 years. Currently, he writes a blog for the online site, Blue Star Media.

Winning his first NSMA National Sportscaster of the Year award, Harlan is the recognizable voice of the NFL and college basketball on CBS, the NBA on Turner Sports, and Monday Night Football on Westwood One. Wojnarowski has won the NSMA National Sportswriter of the Year award for the first time. Known for his NBA scoops, he left Yahoo Sports after nearly ten years, and on July 1, 2017, returned to his hometown of Bristol, Conn. to work at ESPN.

In neighboring Pennsylvania, Marc Zumoff of the 76ers and NBC Sports was named top sportscaster and Jim Salisbury of NBC Sports the top sportswriter. Bruce Beck of WNBC-TV and Neil Best of Newsday were the state winners in New York.