OCHS girls improve to 9-0, boys lose to Lower Cape May

Ocean City coach Paul Baruffi with his players during a timeout.

The girls come right back tomorrow (Saturday) with a game against Atlantic City, postponed from Monday. Because of extensive damage to Atlantic City High School’s gym, tomorrow’s game will be played at the Martin Luther King School Complex at noon. The MLK Complex is located at 1700 Marmora Avenue in Atlantic City.

The OCHS girls, who came into the game ranked No. 11 in South Jersey, improved to 9-0 by coming from behind to hand the Tigers a second conference loss, 61-35. At the same time, Mainland was defeating Holy Spirit, 55-22, to leave the Raiders and Mustangs, who play for the first time on Jan. 24, as the only two undefeated teams in the conference. 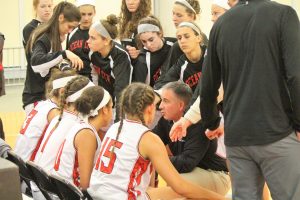 Ocean City coach Paul Baruffi (file photo) with his players during a timeout.

Lower took a 16-10 lead after one quarter but the Raiders rallied to take a 27-22 lead at halftime. After Paul Baruffi challenged them during intermission, Ocean City outscored the Tigers, 18-0, in the third quarter to put the game away.

Sophomore Abbey Fenton led the Raiders with 12 points. Kilie Wyers added 11 with Danielle Donoghue and Tori Rolls each getting 10. Wyers nailed three from behind the three-point arc with Fenton hitting two. Donoghue had two steals and four assists with Rolls, Fenton and sophomore Emma Finnegan each snaring five rebounds.

In the Dixie Howell Gym, the OCHS boys had trouble with Lower Cape May’s zone defense and dropped a 55-40 decision. Lower had a 7-6 lead after one quarter but freshman guard Martin Anguelov made four straight three-pointers in the second period and the Tigers led, 27-21, at the half.

Lower Cape May stretched its lead in the third quarter when Zach Cerasi scored seven points and Pat Moore added six. The Tigers took a 42-29 lead into the fourth period and used the clock to their advantage to improve to 8-2 on the season. Lower’s only two losses have been to Middle Township.

Ocean City entered the game with five players averaging in double figures but only one got there tonight. Junior Donovan Graham scored 10 points to lead OCHS scoring. Luke Varallo added nine with Joe Sacco and Tom Jamison getting seven each. The 40 points the team scored was its fewest in 48 games, covering nearly two years.

Patrick Holden, the Cape-Atlantic League’s leading scorer, and Cerasi each scored 16 points for Lower with Angelouv getting 12. The Tigers made nine three-pointers and the Raiders made two.

The Ocean City boys will host Holy Spirit on Tuesday in a conference game they almost have to win. Spirit defeated Mainland tonight to share the National Conference lead with Lower Cape May.

FREE THROWS: Only three fouls were committed by the two teams combined in the first half …. it was just announced that the OCHS girls will play No. 8 ranked Gloucester Catholic in a showcase game in the South Jersey Invitational Tournament at Eastern on Feb. 18 …. box scores, schedule, results, stats and more are available at http://www.oceancitysports.com/OCDiary.html.