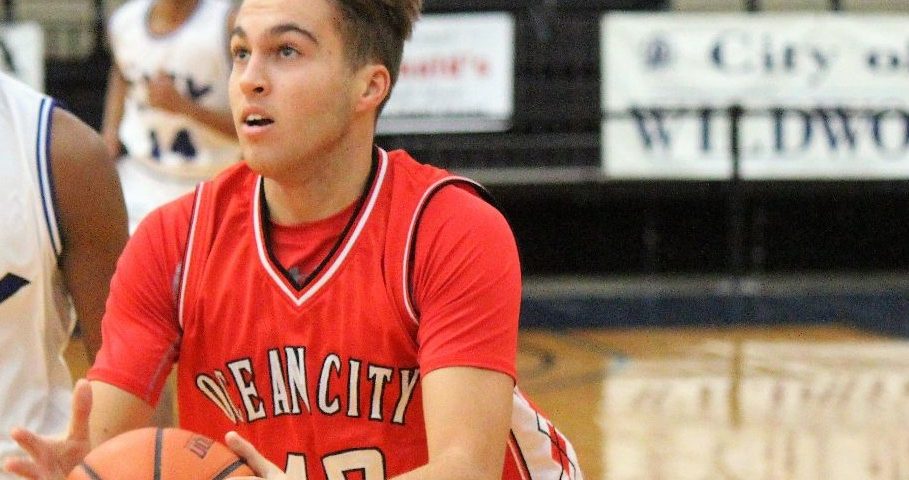 Ocean City and Mainland provided extra basketball tonight as the two schools met for the first time this season.

The OCHS boys held on to defeat the Mustangs, 49-48, in overtime in Linwood. And the Raiders took the undefeated Mainland girls into overtime before dropping a 42-37 decision.

The victory by the boys keeps them in second place, a game behind Lower Cape May, in the Cape-Atlantic League’s National Conference. The loss by Ocean City’s girls drops them into third place behind the Mustangs and Holy Spirit.

Mainland, one of three undefeated girls teams in South Jersey, returned to the Dixie Howell Gym where they had lost a thriller to the Raiders in the NJSIAA South Jersey Group 3 final last March. Tonight they jumped out to a 13-3 lead in the second quarter.

But the Raiders chipped away and made a strong run in the fourth period, outscoring Mainland, 11-3, in those eight minutes. Ocean City only managed two points in the extra period while the Mustangs scored seven.

“It was a great effort,” said Ocean City coach Paul Baruffi. “We battled them all the way and our bench played really well.”

The Raiders completed their rally when Mickey Baker made a layup in the final 15 seconds of the fourth quarter to tie the game at 35-35 and send it into overtime. Mainland scored first and forced a turnover to take charge of the extra period.

Aly Nazarok led Mainland scoring with 12 points. Kylee Watson, the 6-4 sophomore who averages over 21 points a game, was held to nine. “We started out in a zone,” Baruffi said, “and that didn’t work too well. Mickey Baker and Molly Hoffman guarded Watson the rest of the game and did a great job. But Nazarok hurt us. And so did Gabby Boggs (eight points).”

“It was a really nice atmosphere,” Baruffi said, “and both teams defended very hard. You never like to lose but, coming off two tough losses, we are very happy with the effort. We have some tough games ahead and we need to play like we did tonight.”

The Raiders almost let the boys game get away. They led by three points with 38 seconds left in the fourth quarter after Luke Varallo made two free throws. But Ocean City made only one of the next three free throws in the final seconds while the Mustangs got two buckets from Duncan Scandin to tie it up.

OCHS went ahead again in the overtime period, using a fast break layup by Jake McQuarrie, a three-pointer by Donovan Graham and two free throws by McQuarrie to lead, 48-41, with just over a minute left. But the Raiders missed five free throws in the final 69 seconds while the Mustangs scored seven points – five by 5-6 junior guard Joe Massari.

Mainland had the ball out of bounds with three seconds left but Ocean City pressure didn’t allow them to get a shot. The video of those final seconds is below.

Both OCHS teams are in action on Friday. The boys play Oakcrest in Mays landing at 6 p.m. in a game that can be heard on 97.3-ESPN. The girls will host Oakcrest in the Dixie Howell Gym at 6 p.m.

The Ocean City girls will also face Paul VI on Saturday at 5 p.m. in the 97.3-ESPN Girls Shootout at Holy Spirit. The complete lineup of The Shootout is here – http://www.primeevents.net/girlshootout.cgi.

FREE THROWS: John Bruno’s teams are now 20-14 in overtime games, 3-0 this season …. Paul Baruffi had won two straight overtime games, wins over Middle Township in the CAL championship game last year and over Ewing in the State Group 3 Semifinal. His last overtime loss was to Middle in the 2016 CAL championship game …. The last time the OCHS girls lost three straight was Dec. 28-Jan. 3 of the 2009-10 season – two losses in the Boardwalk Basketball Classic and a third to Camden that had been postponed by snow from Tipoff Weekend. That Ocean City team then won eight of its next 10 games …. box scores, schedules, results, stats and more are available at http://www.oceancitysports.com/OCDiary.html.