Cape May Tech junior Josh Wright is on pace to easily surpass 2,000 career points next season. 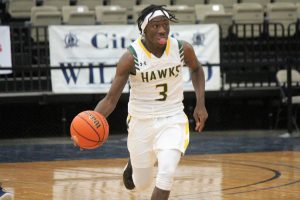 JOSH WRIGHT: 30 points to lead Cape May Tech to comeback win over Wildwood

Josh Wright led the Cape May Tech boys basketball team back from the dead Wednesday evening.

Wright scored 17 of his game-high 30 points in the fourth quarter to spark a furious rally that saw the Hawks storm back from an 18-point third-quarter deficit to post a wild 62-58 victory over rival Wildwood.

“We were down big with three minutes and change to go (in the third quarter), and I honestly don’t know what happened,” Tech coach Josh Mercado said. “Our guys played like a bunch of possessed high school kids.”

The win was Tech’s fourth straight and fifth in its last six games. Also included in the stretch was a one-point overtime win over Middle Township last Friday.

“We were 2-6 at one point with a pretty large group of seniors and we felt like this was the best team we’ve coached so we were disappointed to start like that,” Mercado said. “We just said, forget the nonsense and keep playing basketball. And these local games, these are the ones you’re going to remember five, 10, 20 years down the line, so to get two wins in a week against local teams is great.”

James Longstreet was also in double figures for Tech with 11 points.

Kyion Flanders had 22 points and Tyler Tomlin added 11 for Wildwood (8-6).