VIDEO, PHOTO GALLERY: No late drama this time as LCM pulls away from Cape Tech

It was a sweep tonight by the Ocean City High School basketball teams over Cedar Creek.

The boys won their seventh straight, 81-49, in the Dixie Howell Gymnasium as Donovan Graham scored a career-high 20 points to pace three in double figures.

And the girls won, 51-30, in Egg Harbor City with Emma Finnegan getting 12 points and Danielle Donoghue 10.

Both OCHS teams will face Absegami on Friday. The boys (13-3) will host the Braves in a game broadcast on 106.3-The Shore. And the girls (12-4) will travel to Galloway Township to face Absegami.

The OCHS boys shot 54 percent from the field tonight and took over the game in the first period, finishing the first eight minutes with a 21-16 lead. It was 40-21 by halftime.

Graham scored his career-high 20 by making eight of 10 shots, including his only three-point attempt. He also had five rebounds, five steals and three assists. Luke Varallo scored 11, including a pair of three-pointers, and made three assists. Tom Jamison scored his 10 points in the first half, making five of 10 shots and snatching four rebounds. Joe Sacco had six points, seven rebounds, three steals and six assists.

Senior Jake McQuarrie talks about the seven-game win streak and more in a video interview, below. 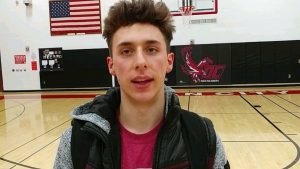 Ocean City’s girls shot 50 percent against the Pirates with Finnegan making four of eight shots and Donoghue four of seven. The girls only made one three-pointer but converted 16 of 21 free throw attempts, an area in which they have been inconsistent this year. Junior Savanna Holt was a perfect four for four at the line.

FREE THROWS: Both OCHS teams will play Mainland on Feb. 14. The boys will be in the Dixie Howell Gym at 6 p.m. and the girls will be in Linwood at 5:30. The games had originally been scheduled as a doubleheader in the Battle by the Bay but were cancelled from that lineup when the showcase was moved this weekend from Atlantic City High School to Stockton University …. schedules, results, stats and more are available at http://www.oceancitysports.com/OCDiary.html.