Wildwood's Kyion Flanders dribbles across the center of the court. 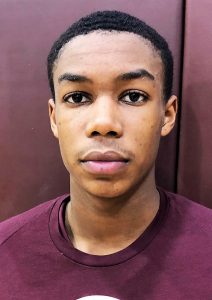 On Thursday, Kyion Flanders set a single-game program scoring record when he dropped 46 points (on impressive 20 for 25 shooting from the floor) in the Wildwood High School boys basketball team’s 111-100 victory over Clayton.

As it turns out, Flanders eclipsed an even more impressive school record one game earlier.

Flanders finished with 22 points in the loss to Tech. He had gone into the game needing 14 points to surpass Conner’s record total.

The game was not stopped and the record was not given mention during the game. Instead, Wildwood coach Scott McCracken said there are plans to honor Flanders should he become the first Wildwood boys basketball player to reach 2,000 career points. With at least 12 games remaining this season, Flanders would seem a lock to reach that number provided he remains healthy. He exited Thursday’s win over Clayton with 1,872 career points, leaving him just 128 shy of 2,000.

Flanders led the state in scoring average last season as a junior, posting 28.8 points per game. He’s scoring a bit less this season, 22.8 points per game, thanks in part to the emergence of other scorers such as Tyler Tomlin and Marquel Matthews.

Wildwood is currently 9-6 on the season.

Flanders is receiving college interest from a handful of Division III schools, most notably Stockton University.