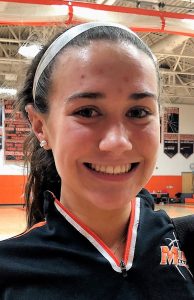 CAPE MAY COURT HOUSE – Katie Herlihy is just a freshman, so forgive her for not fully understanding the ramifications of Friday’s high school girls basketball game.

Herlihy scored 20 points, netting 16 of them in the second half, to pace Middle Township to a 51-43 victory over Wildwood Catholic and give the Lady Panthers full control of first place in the Cape-Atlantic United Conference.

Not that Herlihy necessarily understood all of that.

“This was a big win, apparently,” Herlihy said, flashing a bit of a bewildered smile. “To me it was kind of just another game. But it felt good because it made me feel like I was meaningful to the team.”

“We ask her to do so much, and sometimes it’s easy to forget she’s a freshman,” Middle coach John Leahy said of Herlihy. “Sometimes I have to remind myself of that.”

Middle won despite a Herculean effort by sensational Wildwood Catholic freshman Marianna Papazoglou, who poured in a game-high 30 points on 12 for 25 shooting. But Papazoglou was held to a single point in the fourth quarter and the Crusaders made just one field goal in the period as Middle closed the game with a 13-5 run.

Wildwood Catholic shot 9 for 16 from the floor in the first half but made only 8 of 30 shots in the second.

“Marianna is a really nice player,” Leahy said. “She’s going to get her shots and she’s going to get her points. We just tried to make it hard and I thought we did a better job of that in the second half. I think we did a better job of forcing her to pass the ball more and then contesting the other kids’ shots in the second half.”

Wildwood Catholic led by five late in the first quarter, but Middle closed the half on an 18-8 run. Sophomore Kira Sides sank 10 of her 17 points in the second quarter as Middle took a 27-22 lead at the half.

“I don’t think we got the stops we needed in the second quarter after we went ahead and that allowed them to take the lead and it gave them a strategic advantage,” Wildwood Catholic coach Steve DiPatri said. “They turned up their defensive intensity in the third quarter but we still got the game tied. But then I think we just ran out of steam at the end.

“Their guards played really well,” DiPatri added. “Katie and Kira shot the ball well. Kira, especially, made a couple tough floaters in that second quarter. And then they got some nice play out of their post players, too.”

Bridget McLaughlin was one of those post players for Middle. She came off the bench to provide six points and six rebounds. Four of her rebounds were on the offensive end.

“I thought we did a real nice job on the glass, especially in the second half,” Leahy said.

Middle now sits in pole position in the conference, considering the Lady Panthers and Wildwood Catholic are both on paper and by the eye test the two best teams in it.

“We’re the two best teams in the conference, so obviously it’s nice that we’ve beaten them twice,” Leahy said. “We’ve practiced well the last couple of weeks, which is probably why we’ve won a handful of games in a row. Now we have to make sure we continue to do that.”