Major milestone in sight for LCM senior (with video) 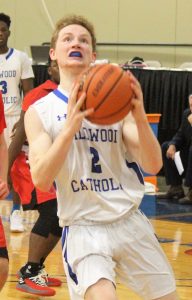 NORTH WILDWOOD – The Wildwood Catholic High School boys basketball team is on a season-long crusade to prove it is among the best teams in South Jersey.

Victories like the one the team earned Monday will certainly help in that quest.

“There’s no doubt in my mind that that’s the best team we’ve played all year,” Wildwood Catholic coach Dave DeWeese said. “Their system is great, their coach is great, their team is great and their program is great. We were really looking forward the opportunity to test ourselves against one of the premier programs in South Jersey.”

Wildwood Catholic (9-0) certainly got tested late. The Crusaders built a 15-point lead a little more than midway through the third quarter at 50-35, but the Hermits rallied furiously to get back in the game.

Charles Solomon helped fuel the charge by scoring 10 of his team-high 14 points in the second half.

St. Augustine (8-2) twice got to within two points in the final minute. But Matt Capozzoli and Jacob Hopping each made two free throws in the dying seconds to ice the victory.

Capozzoli, a senior, and Hopping, a sophomore, are secondary role players for the Crusaders. But the pair combined for 17 points in the second half. Capozzoli led Wildwood Catholic’s early third-quarter charge by scoring seven points in the period. And Hopping made three three-pointers in the game, one a critical basket from 23 feet out after the Prep had cut Wildwood Catholic’s lead to four points midway through the fourth quarter.

“We are truly a team this year and because of that everyone has trust and confidence in each other,” DeWeese said. “We feel like we have nine guys who can play and any one of them can step up at any time. We were fortunate those two guys stepped up tonight.”

Marlon Hargis (12) and Travis Stoll (11) also each scored in double figures for St. Augustine Prep, which outscored Wildwood Catholic 26-15 to close the game.

“We knew (their run) was coming,” DeWeese said. “Their pressure caused us problems. I think we rushed on the offensive end of the floor in the second half. But I thought our defensive effort was solid for 32 minutes. And then we made foul shots at the end.”