Savanna Holt looks for a shot against Claudia Mairone's defense

GALLOWAY TOWNSHIP – There was eight minutes left in today’s Cape-Atlantic League girls basketball championship game and undefeated Mainland Regional seemed on it way to its first CAL title in history. The Mustangs led by 16 points entering the fourth quarter and had allowed Ocean City just 18 points in three quarters.

Mainland (25-0) would eventually win the title, 41-39, in overtime but what happened in those final eight minutes of regulation was remarkable to watch. 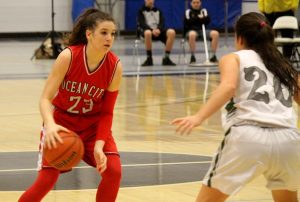 Savanna Holt (above) started the run with a three-pointer. After Francesca Geromini scored for the Mustangs, Tori Rolls drilled one from beyond the arc. Then Danielle Donoghue fired home a three-pointer and scored two more with an offensive rebound, cutting the Mainland lead to seven points with 2:30 left.

Continuing to press the Mustangs defensively, the Raiders got three points closer when Kilie Wyers hit still another three-pointer. When Holt hit again from three-point range with 41 seconds left, Ocean City trailed by just one point. Mainland senior Georgia Schoen made a free throw to increase the lead to two points but Donoghue scored with 17 seconds left with an assist by Holt and the Raiders had tied the score. They had a chance to win the game with two shots in the final three seconds but could not convert.

Kylee Watson, Mainland’s talented 6-4 sophomore, made a free throw and fed Geromini for a bucket to give Mainland a three-point lead with 45 seconds left in overtime and the Mustangs would hold on for the win.

“These girls just never quit,” said OCHS coach Paul Baruffi, with a mixture of pride and frustration. It was the third time this season the two teams had played and the third time the game went into an extra period. They could play again – March 5th in Linwood in the South Jersey Group 3 final – if both teams win tournament games this week on Monday, Wednesday and Friday. Mainland is the No. 1 seed in Group 3 and Ocean City, the two-time defending champion, is No. 3. 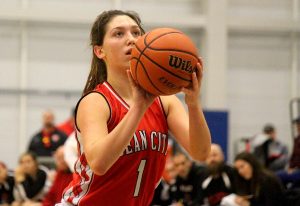 Mainland shot 47 percent to Ocean City’s 33 percent. The Raiders had a slight rebounding edge and outscored the Mustangs, 14-4, off turnovers. Both teams shot under 50 percent from the foul line.

Though his postgame comments were filled with expressions of gratitude for his players, the championship must have been quite satisfying for Mainland coach Scott Betson. Soon after last season ended, a misguided decision by the Mainland administration removed him as head coach. But wiser heads prevailed and he was restored to his job as head coach. And now he has led his team to a championship no other Mainland coach has ever achieved.

FREE THROWS: The Ocean City girls will host Toms River South Monday (5pm) in the Dixie Howell Gymnasium to open play in Group 3. If the Raiders win, they would host either Camden Tech or Gloucester Tech on Wednesday …. Mainland will open Group 3 play on Monday against Absegami, a team it has beaten twice this year. A win there and the Mustangs would host either Delsea or Deptford on Wednesday …. complete box scores for the boys and girls finals and the semifinals are available at http://www.primeevents.net/calbasketballx.html …. the entire game can be watched at http://OceanCitySports.com ….