Gary James Nagle has been a spectator at the state high school wrestling championships quite a few times. Now, he’ll be a participant.

Nagle, a senior from Middle Township High School, rallied through Saturday’s wrestleback round after losing his Friday quarterfinal match to place third at the Region 8 Tournament and qualify for next weekend’s state championships.

Nagle, as well as all of the other top-four finishers in each weight class at the eight region tournaments across the state, will wrestle Friday at Boardwalk Hall in Atlantic City in the opening round of the state tournament.

“I’m really excited for the opportunity because I’ve never gotten to experience it as a wrestler,” Nagle said. “I’ve been going to the state championships every year since I was in seventh grade but obviously I never got to wrestle in it. I’ve wrestled in some big tournaments, like War at the Shore, so I have some experience tournament-wise, but nothing like this. I’m really excited for the type of competition that’s going to be there.” 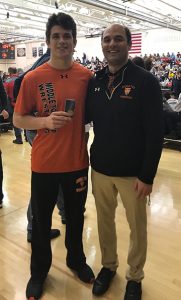 Nagle, who was seeded sixth in his weight class, is the only Cape May County wrestler to advance past the Region 8 Tournament. The six others from the county who made it to the weekend portion of the region tournament failed to finish among the top four in their respective weight classes.

Nagle, a two-time District 30 champion, lost a tough 2-0 decision to Mason Maxwell of Delsea in his quarterfinal bout Friday. Maxwell got the win in the dying embers of the match, scoring two near-fall points with only 14 seconds remaining.

That bumped Nagle into the wrestleback side of the tournament. He began his run there by pinning Kingsway’s Colin Wexler in 4:13 in the wrestleback quarterfinals. He then scored a 5-0 victory over Absegami’s Andrew Marcucci in the wrestleback semifinal round. Nagle was then awarded third place when Buena’s Hunter Suter forfeited due to injury in the third-place match.

“Coming out, I definitely wanted to win against Maxwell but most importantly I bounced back and won the next three to place third so I was happy with that,” Nagle said. “Anytime you go into a tournament you want to win it, but I’m glad I’m moving on to the state tournament.”

Nagle goes to states with a record of 40-4. He has a program-record 103 career victories.