It was a sweep for Ocean City High School on the basketball court and in the pool tonight.

The basketball teams were both winners over Wildwood in a girl-boy doubleheader in the Dixie Howell Gymnasium. The girls won, 50-33, with junior Savanna Holt hitting a trio of three-pointers and leading the scoring with 10 points. The boys got 20 from Luke Varallo and 11 from Joe Sacco in defeating the Warriors, 67-56.

Meanwhile, across town, the OCHS girls swim team defeated Shawnee, 91-79, with Maggie Wallace winning twice and Alex Antonov, Ryann Styer and Claudia Scherbin each winning one race. The Raiders also won all three relays with Styer playing a key role in all three. The win was in a semifinal meet in the NJSIAA South Jersey B Tournament and advanced Ocean City (8-2) into the South Jersey championship game on Thursday at Gloucester Tech against Moorestown, which defeated Mainland, 99-71, in the other semifinal. 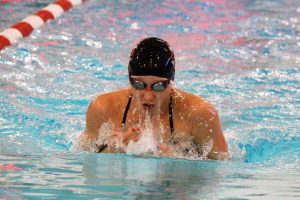 The OCHS boys (17-4) rallied from a two-point deficit at halftime to outscore the Warriors, 29-16, in the final 16 minutes for a 67-56 victory. Varallo made four three-pointers in the game and scored 14 of his 20 points during the second half rally. Once the Raiders got the lead they used the clock to hold on.

Kyion Flanders, the talented Wildwood senior, scored 20 points to lift his career total to 2,024, the third highest total in Cape May County boys basketball history. Flanders spread his points out over four quarters, making four of six free throws. He did not make a three-pointer. Junior Tyler Tomlin chipped in with 16, including two from three-point range.

In the girls opener, Ocean City (16-5) outscored the Warriors (14-7) in every period, though Wildwood continued to attack. Emma Finnegan supported Holt’s 10 points with eight of her own with Mickey Baker, Kilie Wyers, Molly Hoffman and Delaney Lappin each contributing six points. Lappin had seven rebounds and Baker six. Abbey Fenton had three assists.

The Ocean City girls clinched second place in the National Conference and a spot in the Cape-Atlantic League Tournament when Absegami upset Holy Spirit tonight.

Wildwood junior Maddie McCracken, one of the best basketball players in South Jersey, scored 23 points, just a fraction short of her season average of 23.7. She hit four times from three-point range, giving her 31 on the season, and mixed in an assortment of spinning drives and pull-up jumpers.

Baker guarded McCracken for most of the game and she talked about her and Ocean City’s situation in a video interview, below. Baker is shooting better than 50 percent this season and leads OCHS in rebounds.

Both OCHS teams play Mainland on Wednesday – the boys in Ocean City and the girls in Linwood. If the boys win they will share the National Conference championship with Holy Spirit, which defeated Absegami tonight to clinch at least a tie for the conference title. The Ocean City boys are scheduled to host Hammonton on Saturday afternoon and the girls are to meet Gloucester Catholic Sunday afternoon in a showcase game at Eastern in the South Jersey Invitational Tournament.

Wildwood plays Pennsville Tuesday night and Salem on Thursday. In both cases, the boys are at home. The girls play at home Tuesday in a girl-boy doubleheader and are on the road at Salem Thursday.

FREE THROWS: Wildwood still leads Ocean City, 68-63, in the all-time boys basketball series between the schools though the Raiders have won the last five …. junior Tori Rolls sprained her ankle last week and has missed two games. She said she will be back Sunday and, judging by the determined look on her face when she said it, it wouldn’t be wise to bet against her …. box scores, schedules, results, stats and more are available at http://www.oceancitysports.com/OCDiary.html.