It was a busy weekend for Ocean City High School’s winter sports teams.

In the boys basketball tournament on Friday, Atlantic City pulled away from Ocean City after a slow start and won a 76-51 decision behind Ray Bethea’s 41 points, the most points scored against the Raiders in 17 years. The 6-5 senior increased his career total to 1,516 points, passing 1980 graduate Leonard Hayes to become the fourth highest career scorer in ACHS history. Ramon Rodriguez contributed 11 points and Flash Morgan added 10. Ocean City was paced by junior Luke Varallo with 13 points.

The boys bounced back to defeat Hammonton, 73-49, on Saturday afternoon with Varallo pacing four in double figures by scoring 14 points in 13 minutes. It was Senior Day and John Bruno started five seniors after a pre-game ceremony recognizing the families of the senior players. Tom Jamison scored 13 points and grabbed seven rebounds; Donovan Graham had 12 points and seven boards; and Issac Robertson scored 10 and made three steals. The win was Bruno’s 100th in the Dixie Howell Memorial Gymnasium.

In Woolwich Township at Kingsway Regional High School on Saturday, Ocean City sophomore Nick Sannino (above, left) reached the final round of the NJSIAA District 29 Wrestling Championships at 195 pounds. Sannino, the OCHS win leader this season, lost a 7-4 decision to Curtis Thomas of Schalick in the final but advanced to the Region 8 Championships at Egg Harbor Township High School. The Raiders finished seventh as a team. Three other OCHS wrestlers – sophomore Lou Williams (120 pounds), senior Peyton Bristol (126) and junior Bill Kroeger (170) – competed for third place but lost. The top three from each district qualify for the regions. 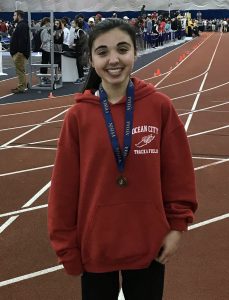 Also on Saturday, Ocean City freshman Alexa Palmieri (above) finished sixth (11:17.80) in the 3200 meters at the NJSIA State Group 3 Indoor Championships. She qualified for the NJSIAA Meet of Champions next weekend. The boys 4×400 meter relay team finished 12th in the state meet but the quartet (Sean Zellers, Louis Conte, Tyler Greene and Matt Zelinski – pictured below) finished in 3:34.82 to break the school record they had set earlier in the season. 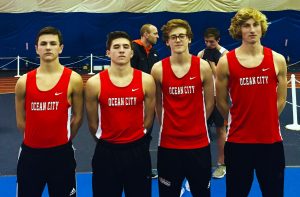 And this afternoon, the OCHS girls were defeated, 53-37, by Gloucester Catholic – the No. 14 ranked team in New Jersey. Ocean City junior Danielle Donoghue led all scorers in the game with 19 points, including a pair of three-pointers.

FREE THROWS: Nick Sannino will begin Region 8 wrestling competition on Tuesday at EHT …. the Ocean City girls basketball team will play Millville on Wednesday at 5 p.m. in the CAL Tournament semifinals at St. Augustine Prep. It will be video streamed live at OceanCitySports.com. If the Raiders win they will play for the championship Saturday at noon at Stockton University …. the Ocean City boys basketball team will host Lower Cape May on Friday in a CAL consolation game …. Alexa Palmieri will run in the MOC on Saturday at the Bennett Center in Toms River …. box scores, schedules, results, stats and more are available at http://www.oceancitysports.com/OCDiary.html.