GALLOWAY — Substitution patterns in high school basketball are based on quite a few factors. Coaches make personnel changes when starters need a rest, to try to exploit a matchup, to remove a struggling player, to get a player with a specific skill set into the game in hopes he can make an impact and other reasons.

In the case of Blane Rossell’s introduction to Saturday’s Cape-Atlantic League boys championship game, it was none of the above.

“I had a hunch,” Wildwood Catholic coach Dave DeWeese said with a smile. “I don’t know what it was, but I just had a hunch.” 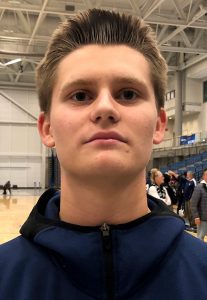 Rossell, a 6-2 senior guard on the fringes of the Crusaders’ regular rotation, proved his coach to be clairvoyant.

Rossell entered Saturday’s game in the fourth quarter and made critical plays to help the team rally from a nine-point deficit and take a lead. The Crusaders squandered that lead but eventually got to overtime and won, 63-57.

They don’t take their fourth-quarter lead without Rossell.

He checked in for the first time with 3:30 remaining and Wildwood Catholic trailing, 47-41.

Twenty-three seconds later, Rossell knocked down a right-wing three-pointer to give Wildwood Catholic its first lead since early in the first quarter. A timeout was called immediately after the shot and Rossell’s teammates rushed the floor to congratulate him on his basket.

Following the timeout, Rossell grabbed a key defensive rebound and began a fast break that resulted in a basket by Charles Fields.

“Coach told me to be ready,” Rossell said. “Before I went in, coach said they were looking for big plays from me.”

He more than delivered.

“We put him in and he hit a huge shot for us and made plays for us,” DeWeese said. “We were in position where we should have closed it out, but we didn’t. But then we did a good job of closing it out in overtime.”

“He had the best two minutes ever,” DeWeese said with a laugh.

Rossell, who transferred into Wildwood Catholic from St. Augustine Prep prior to this school year, is talented enough that he’d be a starter for many CAL teams. For the Crusaders, he’s fallen into a role in which he often plays just a few minutes a game.

Saturday, he proved he can contribute mightily in just those few minutes.